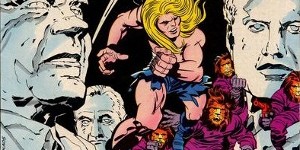 Happy Friday everyone!  It’s time for a new RETRO REVIEW, and as promised, this week it’s time for D C Comics!  Therefore, I’ve dug deep into the DC long boxes and pulled out Kamandi, The Last Boy On Earth # 29.  This comic is cover dated May, 1975 and it is an important book.  Why, you ask?  Well I’m glad you asked!  But I’ll get to that in just a bit, so hold your horses!

First, I need to tell you that Kamandi, The Last Boy on Earth was created by Jack Kirby, after his 4th World Books (New Gods, Forever People & Mister Miracle, not to mention his run on Superman’s Pal Jimmy Olsen) had all been cancelled by DC for lack of sales.  I guess DC comic buyers were just not ready for Jack’s style back in the early 1970s.  I’m sure it was quite a shock to their readers back in the day.  Jack was synonymous with Marvel Comics and pretty much represented Marvel’s “house style” and certainly not anything like DC’s “house style”, which was more Curt Swan!

Time has shown that Kirby’s DC creations have outlasted his own short tenure at DC Comics, thus proving that he truly was the King of Comics!  Whether at Marvel, DC or anywhere else!  But back to Kamandi.  The book started with issue # 1, cover dated November 1972, It’s a classic cover, so I’ve provided it for you: 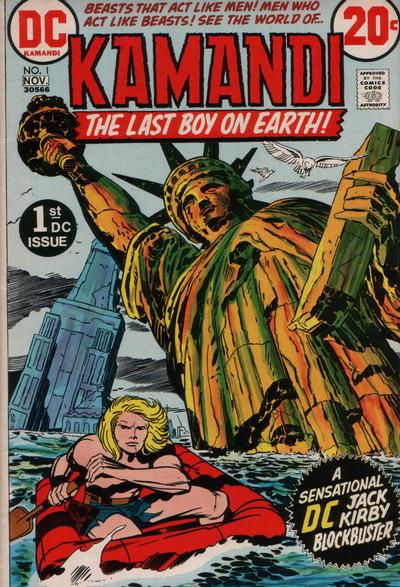 Now, that’s a cover!  Jack really new how to grab your attention.  The book was written with the Planet of the Apes maybe as a starting point, but Jack only used that as a launching pad, as he took it even farther, as not just the apes had gained intelligence! Jack tells the story of a boy who had survived the Great Disaster, when man no longer was the most intelligent species on Earth.  This mysterious Great Disaster had pretty much returned man to “caveman” status and other animal species to a higher position than man!

Jack never made it clear that Kamandi’s world is our own, or even DC’s Earth One, but that changed in issue # 29, which is the issue that this RETRO REVIEW is dealing with.  So without further ado, let’s get to Kamandi # 29.  So let’s take a look at that cover: 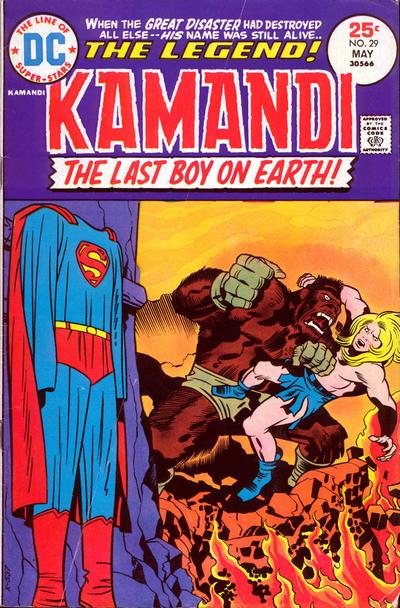 The cover is pencilled by Jack Kirby and inked by D. Bruce Berry and it shows Kamandi battling a giant ape, over a pit of fire, with Superman’s suit hanging in the foreground.

The issue is entitled; “Mighty One!”, though the cover shows an alternative title, and maybe a better one; “The Legend!”  In fact Jack uses this as the title to chapter two!  The writer is Jack Kirby, from idea by Steve  Sherman.  Jack Kirby also provided the pencils and D. Bruce Berry supplied the inks!

The book opens with Kamandi and his friend, Ben Boxer observing a flying figure and Kamandi says; “That’s not a bird or a plane”, rather familiar a phrase, though this is the negative, still …  They then come across a tablet of revelation, which tells the story of the Mighty One, who at the time of the Great Disaster, flew and descended into the earth itself, to block off the flames from the Earth’s core that threatened all life and created a new land.

Kamandi and Ben are discovered by a band of apes, who mistake Ben for the reincarnated Mighty One!  Ben wants to clear things up immediately, but Kamandi convinces him to go along with it.  Ben is quickly challenged by an ape, named Zuma.  A battle ensues, but is stopped so that the two may go to the “Demonstration Course”  or DC!.

There we witness apes being sent flying via a catapult to see if they can fly like the Mighty One.  Next up is the challenge to move a giant rock shaped like a ball which is called … The “Daily Planet”.  Zuma is unable to move it, but Ben using trickery, manages to make the “Daily Planet” roll/move!

Next they test Ben’s ability to be “faster than a speeding bullet”.  As Ben’s a mutant, he can switch to a steel form, so the bullets don’t kill him, though the apes think he has dodged them rather than survived being shot by a gatling gun!  Once Ben passes this final test, the apes open a vault underground, but before Ben can descend, Zuma pushes past him and rushes into the vault, followed quickly by Kamandi!

Once inside, they discover Superman’s suit!  Zuma claims it, but Kamandi rushes to prevent Zuma from seizing it.  A short, one sided battle happens, but Kamandi gets the upper hand with a well thrown rock.  Zuma comes up ready to kill Kamandi, but in doing so he steps on Superman’s cape.  Kamandi grabs the cape and in doing so causes Zuma to topple into the fiery pit!

Ben ultimately declines the honor of being declared the Mighty One, and says that one day the true Mighty One will return to claim the suit.  So the suit is left in the care of the apes and Kamandi and Ben head out for their next adventure.

So why is this an important story?  Well, if you haven’t figured it out yet, it clearly establishes that Kamandi’s world, is the world of DC Comics, or Earth One!  It also establishes the fact the Superman was still active up to the time of the Great Disaster and that he played a roll in saving the Earth before disappearing.

Did he die?  Did he leave Earth?  Is he still on Earth, living at his Fortress of Solitude?  These things are not revealed, but it does tie Kamandi to the DC Universe, make no mistake about it!

So what are your thoughts on Kamandi?  Or on Jack Kirby’s DC work?  Let me know in the comments section and make sure you come back next week for another Fabulous Find!  Be seeing you …