How Did Invader Zim Get Made? 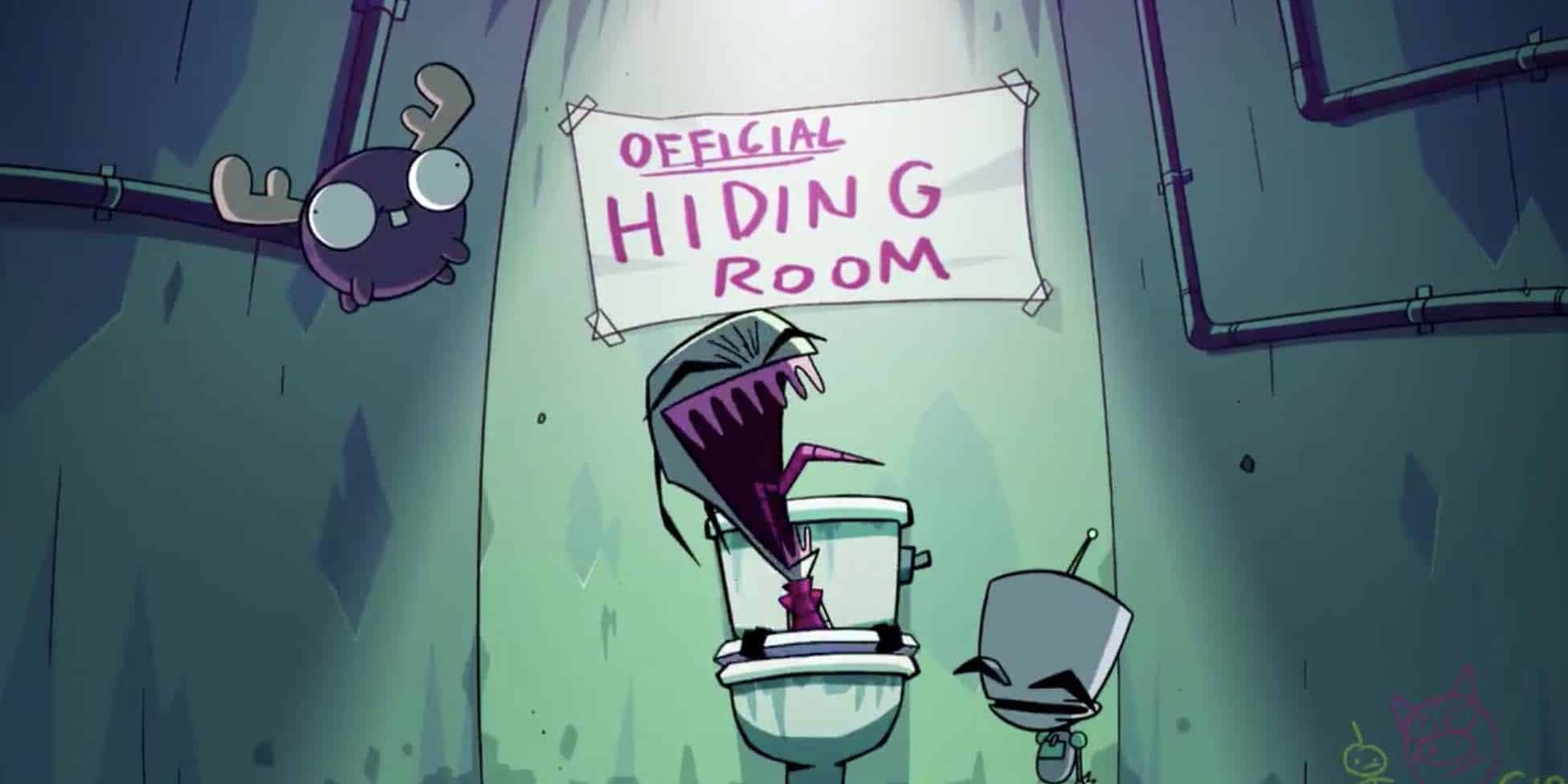 Welcome back to Consigned, Cool, & Collected! Every Monday, your pals at Back to the Past stop to consider the greater place that our dusty treasures occupy in America’s cultural landscape. This week, we are looking at a set of adult collectible action figures based on a children’s cartoon that was only just barely off the air when they produced. We are, of course, talking about our selection of Palisades Toys’ Invader Zim figures. 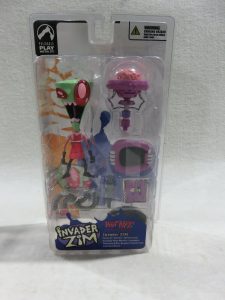 Jhonen Vasquez was just a boy when he discovered the Teenage Mutant Ninja Turtles. No, not the cartoon series – the original Eastman & Laird comics. He was immediately taken by them, thrilled by the rough edged art style that was miles away from anything he’d seen in a “mainstream” comic. It inspired him, and he became a cartoonist. His signature character quickly became Johnny C, a homicidal maniac.His first published works were in his (shockingly permissive) high school newspaper, where his strip was  “Johnny the Little Homicidal Maniac”. He graduated in 1992 and went on to film school, but quickly dropped out to focus on cartooning. Like Rob Liefeld, Vasquez had little to no formal training. Unlike Rob Liefeld, Vasquez’s highly stylized art is top-notch charming (I considered removing this opinion, but agree too strongly to do so… -Ed.).

Vasquez moved on to publishing one-page strips in goth magazine Carpe Noctem in the early 90s. This work caught the eye of Slave Labor Graphics, who commissioned Vasquez to make a full mini-series starring Johnny the Homicidal Maniac. Johnny C is serial killer, mass murderer, and spree killer who is haunted by figures that may or may not be hallucinations. These horrifying visions guide Johnny to murder anybody who annoys him and paint a wall in his home with their blood. This will keep a cosmic horror at bay, or at least that’s what Johnny believes. Pulling all that off while being almost light-hearted about it is the reason why the comic remains a cult favorite to this day. 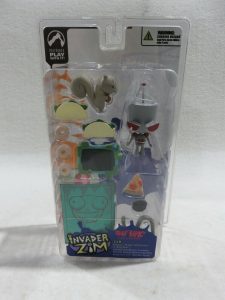 Johnny the Homicidal Maniac is not, generally, considered an all-ages title. Nor are its spin-offs Squee! or I Feel Sick, which rounded out Vasquez’s work in the 1990s. Nevertheless, children’s cable network Nickelodeon reached out to him at the dawn of the New Millennium. They were looking for something that could be aimed at what we’d now call a “middle grade” audience, and asked Vasquez to pitch some ideas. His first pitch was about an inept alien invader attending elementary school and battling a highly competent (but oft ignored) classmate/paranormal investigator. The network bought the pitch, and Invader Zim was born.

Invader Zim debuted on Nickelodeon on Friday, March 30, 2001. I, Chris, was eleven years old at the time and exactly the kind of kid that Nick was looking to ensnare with the series. Looking back, it is a wonder that Invader Zim ever made it to air. It is basically what you’d expect a kid show from the creator of Johnny the Homicidal Maniac to look like. I specifically recall one episode in which, in order to pass a school physical without detection, Zim steals internal organs from his classmates. Most of the episode is the eponymous invader lurking the shadows hunting his classmates as they try to make it to the nurse’s office for their own examinations. It’s like a horror movie in eleven minutes. And it’s the fourth episode of the series. How the heck did that make it to air? 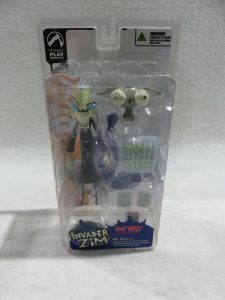 Freakazoid! and Invader Zim: Birds of a Feather

In its time, Invader Zim did rather well. It was critically lauded and award nominated, and ragingly popular…with the wrong demographic. Nickelodeon’s target demo is children ages 2-11. Ratings in that demo started “ok” and fell to “abysmal” over its first season. It was, however, steadily popular with teenagers age 14-18, itself a fairly desirable demographic but not the one that Nick wants. Much like Freakzoid! a few years before, the viewership skewed too old for the network’s liking. Zim would remain popular in reruns on Nickelodeon and Nicktoons throughout the 00s, but it was cancelled in 2002 with only seven episodes of its second season completed. They remained unaired until 2006. 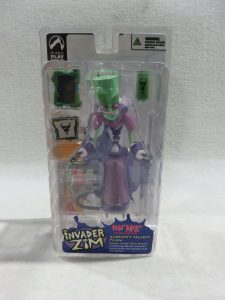 In the early 00s, Palisades Toys was riding high on the burgeoning collectible action figure market. Their premier lines were faithful recreations of the original Micronauts toys and an ongoing series of highly detailed Muppet Show figures. They supplemented these with smaller lines based on cult classic movies and the world of adult animation. It is that latter category that lead them to license Invader Zim in 2004 – two years after the show was officially cancelled.

The Age of the Nostalgic Millennial

The fact that Invader Zim got action figures from an adult-collector-focused company over Hasbro or Playmates demonstrates who was really watching the show. And Zim proved a lucrative license for Palisades, who kept making merchandise based on the series until it went kaput in 2006. Although not a mega hit like Spongebob Squarepants or The Fairly Odd Parents, Zim remains a cult favorite bit of nostalgia to millennials of a certain age to this day. As such, we expect that the Invader Zim Palisades figures we’ve got up on eBay won’t be there very long.

People who grew up watching Invader Zim are about the age now that Micronauts fans were when Palisades brought those toys back. People born in the 90s are hitting their 30s, finally have a modicum of disposable income, and want to reclaim their youth just like 70s-80s kids were doing in the early 00s. Now’s a good time to sell those 20ish year old Invader Zim, Family Guy, [adult swim], et al collectible figures that decorated your edgy teenage bedroom, and we’re here to help with that. And if you’re not ready to sell yet, we’ll be here stoking your nostalgia every Monday in Consigned, Cool, & Collected!