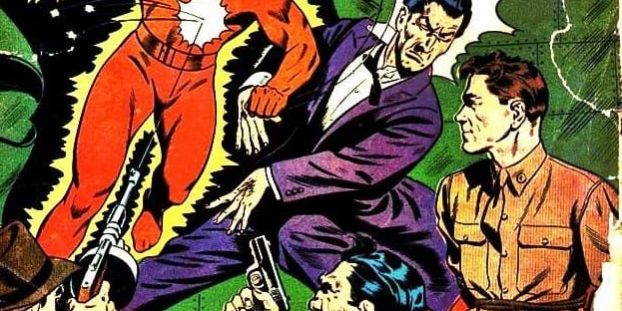 Welcome back to My Hero! Each week, Back to the Past uses this column to tell you why the obscure characters from our custom action figure collection are great! Years ago, we purchased the life’s work of an artist and comic fan whose chosen medium was granting forgotten comic characters the action figure immortality denied to them by major toymakers. We’re still sorting through it all, and we’re making new finds every week! This week’s find, who will soon be available on ebay, is Nedor Comics’ Pyroman! 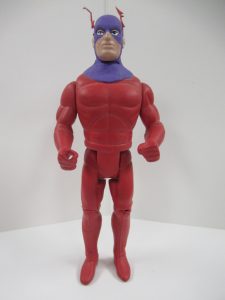 Pyroman as he appears in our Custom Action Figure Collection!

Research student Dick Martin worked with high voltage electricity. 1940s safety standards being what they are, he was exposed to a LOT of energy. Over time, he built up a tolerance for the stuff just like one would for a poison or intoxicant. This served him well when he was wrongly convicted of murder. He was sentenced to death by electric chair, and his tolerance for electricity charged him up and granted him superpowers.

Donning a red and purple costume, Dick cleared his name as Pyroman! Why an electric hero called himself “Pyroman” is a mystery for the ages – so far as we know, the prefix “pyro” has never refereed to electricity. Pyroman made a grand total of thirty-fix appearances between Starling Comics and America’s Best Comics, Nedor’s two flagship titles. 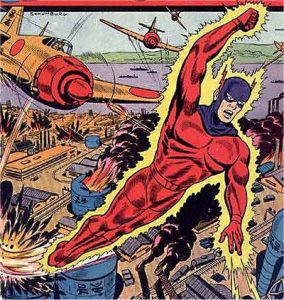 Pyroman as he appeared in the comics of the 40s. Note the complete lack of flame.

The Further Adventures of Pyroman

Pyroman, like all Nedor characters, has lapsed into the public domain thanks to decades of disuse. Technically speaking, Fawcett Comics renewed the rights to the characters back in the day and DC Comics would theoretically own them now thanks to buying Fawcett. The fact various people have been using these characters unhindered for over thirty years now means, however, that you’re probably safe.

Such unhindered companies include the usual suspects over at Dynamite Entertainment, with their Project Superpowers universe, and AC Comics’ Femforce world. Alan Moore specifically used the Nedor heroes in the pages of Tom Strong and its spin-off Terra Obscura, but those are Wildstorm books and therefore owned by DC (its the Katamari Damacy of comic companies). That said, he’s never been a huge character in those revivals and he completely missed the “everybody gets an action figure’ era of comics publishing. If you think he’s neat and want him on your shelf, you’re going to need to turn to a custom action figure collection like ours. And if you’ve got collection like our Custom Action Figure collection– be it original art, garage kits, convention sketches, whatever – and are looking to sell it, get in touch!