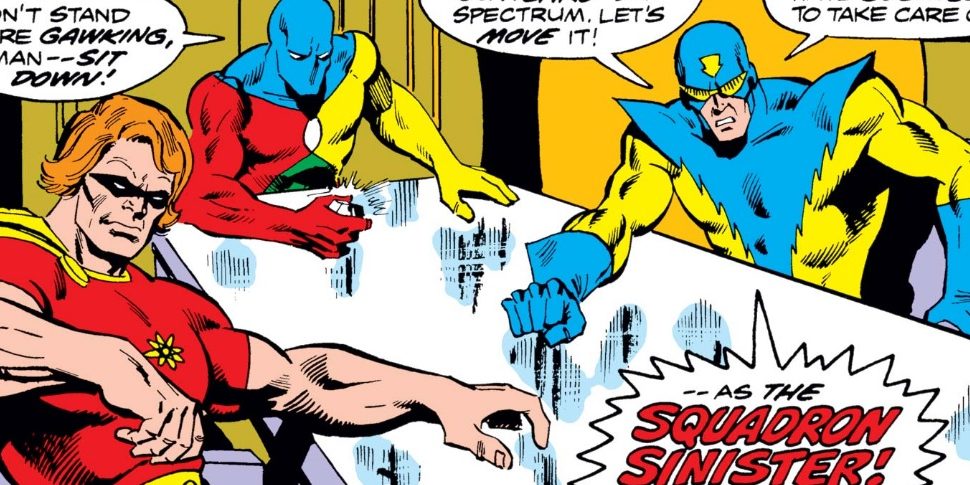 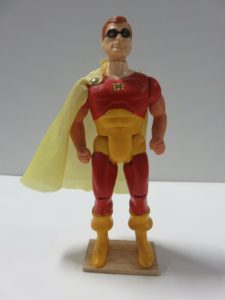 Welcome back to My Hero, our weekly dip into the collection of the same name! A lone superfan spent years repainting, rescultping, sewing capes, and generally altering dozens of action figures to capture the likenesses of the most obscure characters in all of comicdom. We were so taken with his life’s work that we bought the entire collection, and it is now our honor to present it to you. This week, we’re starting a four-part series in honor of Marvel’s recent Heroes Reborn event and looking at the members of the Squadron Sinister – first up, Hyperion! Where to sell collectible toys?

Avengers #69 featured Earth’s Mightiest Heroes being lured into a trap by their perennial foe Kang The Conqueror…who desperately needs their help. It seems Kang has gotten himself into a bet with The Grandmaster, a mighty cosmic being who loves to make wagers. Kang has chosen The Avengers as his champions to go up against The Grandmaster’s Squadron Sinister, a gang of crooks altered to replicate the costumes and superpowers of Earth-S’s Squadron Supreme. Their leader is Hyperion, a being that is faster than a speeding bullet, more powerful than a locomotive, able to leap tall buildings at a single bound, etc, etc. The whole Squadron was a lawyer-friendly takeoff of the Justice League, and Hyperion was their Superman. 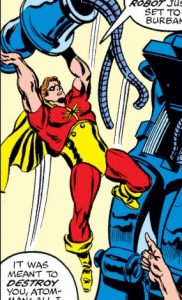 Sinister Hyperion in Action! Customizer even got the boots right!

The Avengers beat the Squadron handily, and the Grandmaster abandoned his creations for their failure. A few members made solo appearances as baddies in the next few years, but the Squadron Sinister’s next major group appearance didn’t come until 1974’s Defenders #13. The team was contracted by alien explorer Nebulon to help terraform the Earth for his species, but Nighthawk (the team’s Batman analogue) wasn’t down for that. He betrayed his teammates and aided the Defenders in defeating the Squadron Sinister, who Hyperion would lead in revenge efforts now and again in the pages of The Defenders. Hyperion’s most notable outing afterwards was a solo shot in Thor #280: whilst tailing the God of Thunder, the Sinister Hyperion learns that he has a heroic counterpart on Earth-S. He secretly follows Thor & Supreme Hyperion to the alternate Earth and teams up with hirsute mad genius Emil Burbank (a play on the brilliant bald baddy Lex Luthor) to battle the heroes. Thor drags him home after he and Supreme Hyperion beat the bad guys.

That set the stage for his final appearances in Mark Gruenwald’s epic Squadron Supreme mini-series, chronicling the adventures of the Squadron Supreme on Earth-S. Burbank, now going by Master Menace, recruits The Sinister Hyperion in Squadron Supreme #7-8 to help destroy the team from the inside. Exiling the heroic “real” one to something that’s legally not the Phantom Zone, the Sinister version replaces him by feigning amnesia to the rest of the Squadron Supreme. While doing so, he falls in love with Squadron Supreme member Power Princess, murders her ailing elderly husband to free her up, and romances her under the pretense that he is her longtime teammate. This leads him to betray Master Menace and exile him to Not-Phantom-Zone, forcing Burbank to work together with the “real” Hyperion to escape. The two, near-identical Hyperions then engage in a destructive battle that ends with the original blinded in a heat vision duel and the villainous double revealed as an artificial duplicate all along – he was basically Bizarro the whole time. Having expended all his power in the battle, he decomposes into goo in Power Princess’ arms while confessing both the truth of his feelings and his horrible crimes.

Growing up, I’d always read about Squadron Supreme being one of best comic stories of all time, with it often ending up on lists alongside Watchmen, The Dark Phoenix Saga, Batman: Year One, and other influential 80s tales of that ilk. In college, I actually read it for myself and found those accolades to be well-deserved. I’d heard of the Squadron Sinister before that, but Sinister Hyperion’s two issue arc within the larger mini-series made me love the character. Sure, he was a duplicitous murderer, but he was perfectly willing to selfishly sacrifice grander evil plans to satisfy his personal feelings – that’s pretty interesting. While Hyperion has appeared in various cartoons, video games, and action figure lines in recent years, even villainous ones have been more closely based on the heroic version from Earth-S. To get the true original Squadron Sinister version, you need the custom figure from the My Hero collection!