Last week, as you’ll remember, I spoke of some of the early missteps made by publishers looking to enter the digital comics market, citing how that many either used new tools like flash animation and special effects to simply create multimedia digital versions of print comics, or unwittingly moved away from what comics were and instead created efforts more like videogames. Such attempts made it clear as to what digital comics would not be, even if what they would be remains difficult to envision. Did you miss it, and are intrigued? Did you read it but forgot? Interested in bumping up the hit count for last week’s installment? You can address all of that by checking out IWTY #23.
When the printing press was first invented, people saw it as a way to mass-distribute creative works that had once been available only to a privileged few, but few if any foresaw that it would usher in a cultural renaissance. When the internet was first made available into people’s homes to check email and perhaps engage in online chat, not many imagined that it would become essentially an everyday household utility that would allow for such pervasive pastimes as streaming video or online shopping. And when digital comics first came on the scene and provided electronic versions of traditional comic book stories, no one really could guess what would come from that, and still can’t. Come back in five years, and maybe we’ll have an idea.

In the meantime, though, let’s look at what digital comics have been, thus far. Only fitting after last week’s sampling of what they weren’t, and still aren’t. To date, most all digital comics have followed the familiar format of traditional comic books, or sometimes comic strips. As the earliest digital comics, from the mid 90s, predated the proliferation of the internet, these works were restricted to release on CD-ROMs, were largely sold in the same manner as printed comics, and could be ordered by retailers through Diamond Comics Distribution as well as other distributors, at least when there still were other distributors. But the advent of digital comics came during an era that featured not only an unprecedented glut of comics put out by Marvel and DC Comics, but also at a time when newer publishers like Image Comics and Valiant were making huge inroads into the market. The speculator-driven frenzy drew a lot of attention, and most of comics buyers’ disposable income, to print comics, and relatively few took notice of the fledgling digital comics publishers or their products. 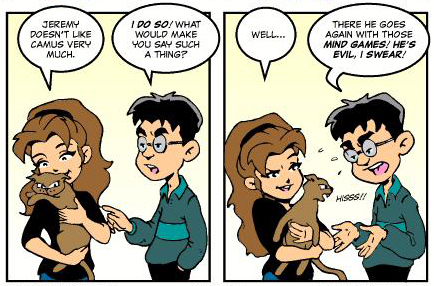 Gisèle Lagacé's Cool Cat Studios was one of the early webcomics, found (at the time) on www.keenspot.com

But when the internet became more widely used by people at home come the late 90s, digital comics had an instant advantage: online availability. And perhaps more importantly, they could be sampled for free. So while mainstream publishers contracted their output after the inevitable post-speculator crash, these new webcomics, freed up from competition from established publishers and the distributor wars that took all but one of them out of the market, were finally able to grow. One of the earliest sites for webcomics was Keenspot Entertainment, which launched in 2000 and as anyone who just now clicked that link discovered, is still around. Keenspot latched onto a sustainable business model that allowed them to survive the subsequent dot-com crash, by collecting completed works into graphic novels and distributing them through traditional channels, as well as instituting a subscription service that gave members ad-free content.

The second installment of Tom Zahler's Love and Capes, circa 2006

Many creators have found success starting out this way. Tom Zahler’s Love and Capes, the acclaimed and hilarious parody of the prototypical superhero and his civilian girlfriend / wife, started as a webcomic five years ago and continues to this day not only in that format, but follows the Keenspot model by “reprinting” the stories as print comics, and trade paperbacks, available through brick & mortar retailers. While not attracting much mainstream attention, at least yet, Zahler’s comic is among the most popular in indie comic circles. 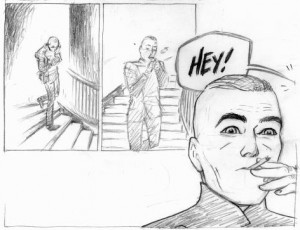 A recent page from Finder, after the series had migrated from print to the web.

There have also been creators who have found success going the other way; indie creator Carla Speed McNeil launched her science-fiction, Eisner-winning Finder series back in 1996 as a traditional comic book, and followed the standard practice of collecting each arc as a trade paperback. But several years ago, citing that the TPBs had a larger audience and generated more revenue than the individual comics, McNeil elected to discontinue publishing the series in that format and instead published the individual issues exclusively on her website, but collecting them in trade paperbacks as before. If not for the internet, the series likely would not have continued.

So for newer, independent works, digital comics paved the way for webcomics that allowed creative efforts to begin, live on, and succeed where they might not have otherwise. Through the proliferation of webcomics that span the entire spectrum of creative quality, popular efforts like Scott Kurtz’ PvP and James Kolchaka’s American Elf are a good indication that, whatever the current state of the comic book industry, comics WILL survive, and possibly even thrive.

Scott Kurtz' PvP has long been a popular and successful webcomic.

But if so, what does that mean for all of the properties that came before, who were born into a different and possibly soon-to-be obsolete medium? Are they to be forgotten, relegated to basements, attics, and longboxes, while newer creations will be at the forefront, readily found with a few keystrokes and mouse clicks? Will these characters fade along with the medium that birthed them? 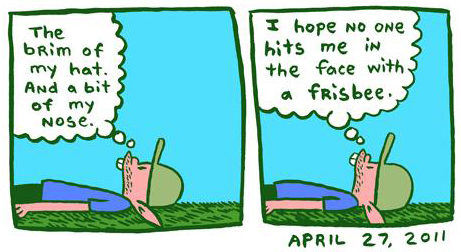 I will tell you. But I think you know the answer.

Of course not. The age of digital media has the potential to not only save these existing characters from death-like obscurity, but to rescue those out-of-print properties that have already met with such a fate. Superman will never go away, of course, but you tried to find a reprint of, say, Action Comics #303 lately? Maybe it’s out there. Maybe not. But if it is, can you find it? And if it isn’t, well, digital can change that. Online media isn’t going to be the death of comics; it’s going to be the savior. If any creative work fades into obscurity, it doesn’t have to be just because it went out-of-print, because there will no longer be any such thing. If nothing else, digital media can serve as the ultimate vehicle for preservation. Nothing has to die.

Anyone remember Teri S. Wood’s Wandering Star? Earlier this year, Wood started running this wonderful, and long out-of-print, series from the mid 90s on her website. But how about excellent and diverse Eclipse Comics’ Alien Worlds and Twisted Tales anthologies from the mid 80s? Or the cutting-edge Star*Reach comics from the 70s? Or the compelling human drama All The Wrong Places graphic novel by Tom Galambos from 2001? Never heard of it? Well, you might have, if it were readily available, i.e., digital. All of these works deserved to be forever preserved, and accessible.

The demise of vinyl didn’t kill the music industry. The eventual discontinuation of film certainly won’t spell the end of the movie industry. And, the move away from print won’t kill the comic book industry.

Instead, it will liberate it.

Category: Comic BooksBy Jim JohnsonMay 3, 2011Leave a comment
Tags: I Will Tell You