As I’ve mentioned in this column ad nauseum, the Detroit-area convention scene had been humming along comfortably enough with the annual and once-dominant Motor City Comic Con each spring, and for a time also included a smaller show each fall. That is, until last year, when Detroit Fanfare came along in October, establishing itself as part of a now-changed convention landscape.

Shortly after DFF was announced, Motor City Conventions also announced the return of its fall show, which was originally scheduled the very same weekend as DFF but was later moved to a few weeks later in November, before being canceled entirely. Many interpreted the sequence of events as a reactionary move on the part of MCC, presuming that this momentarily reinstated and oft-called “Spite Con” was a thrown-together affair done with the intent of hurriedly restaking its claim to the fall convention timeframe. And that the rescheduled dates were a sign of weakness in acknowledging that DFF would be the go-to show if the two were to compete head to head, and that the eventual cancellation was a flat-out admission of defeat.

The lack of comments from MCC at the time, both publicly and after repeated attempts to get comments in support of the feature done for this column, certainly did nothing to refute these claims. Further supporting this were claims from convention coordinator Jeff Serling, who’s in the unique position of having worked for MCC but now works for DFF, who previously stated that, as of his last day on the job for MCC, there were no plans for a fall show that particular weekend.

Historically, however, conventions on the magnitude of MCCC’s fall show are typically not put together in the relatively short timeframe that the show appeared to have between its announcement and originally planned dates. And the possibility exists that the show could have been in the works prior to the announcement of DFF. But the short and vaguely worded explanation of the show’s cancellation (something to the effect of being unable to put on a high-enough quality show) on MCC’s website didn’t lend any credence to that and instead only caused the rumors to persist.

During setup for this year’s MCCC, convention organizer Michael Goldman claimed that a fall show had indeed been planned originally, and that its eventual cancellation was not an external response to DFF but instead from a combination of internal factors, among them that he didn’t have any personnel in place at that time to organize such a show. Referring to Serling’s replacement and this spring’s show coordinator Miriam Kruger, who took the position after the fall show, Goldman stated “Miriam did a fantastic job networking and helping to get much better comic book guests,” but added that he had no one in place who was able to pull off a similar feat for the fall show. 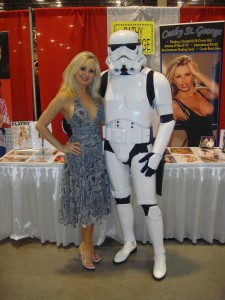 Motor City Comic Con's blend of media guests all but guarantees that it will be the only con in Detroit featuring former Playboy model Cathy St George posing with a stormtrooper from the 501st Legion.

Although Goldman cited internal reasons for not going through with the fall show last year, he pointed out a number of external factors for not planning such a show this year, the most prominent among them: Detroit Fanfare. “I don’t want to do a fall show this year, if Fanfare is running. Quite honestly, I thought that Detroit might be getting back to the point where it could hold two shows, but as long as (Fanfare’s) running, I’m not going to do another fall show. For me, the most profitable part of my business is still selling Golden Age and Silver Age comic books. If I were just relying on this convention to make a living, I’d be doing something else. And so many of these other shows come through in the fall, like New York Comic Con, and these are all shows that I go to and exhibit; I’ve got more shows to do this fall than last year. The reason I stopped running the fall show is because the last one that I ran, I lost about $25,000.”

So, while Goldman maintains that last year’s show was canceled for internal reasons, it’s clear that future ones won’t occur for decidedly competitive ones, at least in part. Especially with the aforementioned money-losing show from 2006, which was not in competition with any other shows. But there’s another recent internal development at MCC that certainly would be sound reason for not doing another fall show, at least this year, and that development was Kruger’s decision to leave the organization during the spring show.

“I wasn’t fired,” Kruger asserted, addressing rumors that have circulated since her departure, citing instead difficulties working within the organization. “I tried, as best I could, to revive Motor City and bring the fans and community the successful/magical show it once was. Unfortunately, I was a ‘one man show’ since my return to MCCC in mid-February. I did the best I could without a staff to help, and without any direction from the top.” 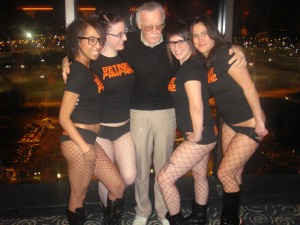 Stan Lee with the Detroit Fanfare girls, who put in a surprise appearance at Motor City Comic Con's official party. The girls, that is, not Stan.

So with Goldman all but admitting to retiring one of his shows citing Detroit Fanfare specifically, and DFF organizer Dennis Barger Jr, engaging in some rather sensationalized tactics to promote his, these occurrences that took place during MCCC leave no doubt: the battle lines have been drawn.

Begun, the con wars have.

So what happens now? Motown has a comics scene, sure, but it’s one that’s rapidly turning ugly. One show has already become a casualty, and so have individuals. Can things be turned around, before there are any more? Or does someone have to go crashing down in flames, before there is any kind of peace?

In a first for this column, I can’t tell you. Because I just don’t know.

“I do believe in friendly competition, and I think there’s room for a spring and fall show run by two separate parties,” Kruger added. “In my opinion, I think the two entities could have worked together to promote each other, but I know that was far-fetched and a little unrealistic, considering the history between all parties involved. The jabbing, negativity and childish behavior is uncalled for and will never bring long-term success. I only hope that both conventions can get it together and stop all of the nonsense.”