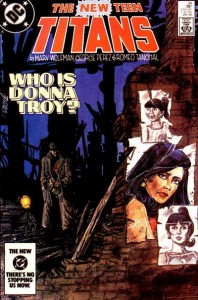 Cover dated, January 1984, from D C Comics, this week’s RETRO REVIEW is The New Teen Titans # 38.  The book is written by Marv Wolfman, pencilled by George Perez, and inked by Romeo Tanghal.  The cover also features George Perez artwork, though not his best in my opinion, showing a trenchcoat wearing Robin searching through the wreckage of a building.  The title of the story is “Who Is Donna Troy?”.

You may, or may not, know that Donna Troy is the alter-ego of Wonder Girl.  Wonder Girl made her first appearance in the D C Comic universe in The Brave & The Bold # 60, in July 1965.  Wonder Girl is said to be Wonder Woman’s younger sister and was an original member of the “junior Justice League” or Teen Titans, along with Robin (Dick Grayson), Kid Flash (Wally West) and Aqualad.  This team of young heroes next appeared in Showcase # 59, in December 1965 and were spun off into their own series, Teen Titans #1, cover dated February 1966.

Wonder Girl’s origin established that she was a non-Amazon orphan, rescued by Wonder Woman during an apartment building fire.  This origin was shown in Teen Titans # 22, cover dated August 1969.  Wonder Woman was unable to find the baby’s parents or any family, so she brought the baby back to Paradise Island, where she was eventually given Amazon powers using the Amazon’s famed Purple Ray!  Wonder Girl herself decided to adopt the name of Donna Troy, since all her teammates had to call her was either Wonder Girl or Wonder Chick, in that wonderful 60’s vernacular!

Now let’s jump to the 1980 revival of the Teen Titans, as The New Teen Titans.  Donna is once again a member of the New Teen Titans and they are joined by other new heroes.  Wolfman and Perez have given her a romantic interest in the shape of a slightly older college professor, Terry Long.  With plans to marry, Terry comes to Robin and enlists his help in trying to determine who Donna’s parents were as a sort of wedding gift.

Robin investigates the events surrounding the fire and discovers that Donna’s birth mother was a woman by the name of Dorothy Hinckley, an unwed teen mother, who was dying, so put her baby up for adoption.  After Donna’s adoptive father is killed in a work-related accident, her adoptive mother, one Fay Stacey, gave her up for adoption yet again, as she was unable to raise the toddler because of lack of money.  However, Donna became a victim of a child selling racket, where the racketeers die in the fire that Donna was rescued from all those years ago!  Boy, is that complicated, or what?

With Robin’s assistance, using the detective skills learned from Batman, Donna is reunited with Fay, who since that time has remarried a man, by the name of, Hank Evans, and has given birth to two children of their own.  That is certainly a convoluted origin story for a character once thought to be  Wonder Woman as a teen, but existing in the same timeline!  You have to give Wolfman credit for coming up with such an original and modern origin tale.  And the book is extremely well drawn by Perez, as well.  And as such, I give it four (4) out of Five (5) Legion Flight Rings. 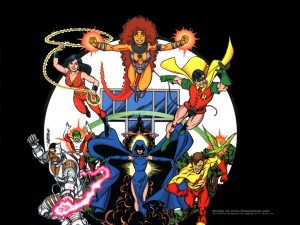