I WILL TELL YOU #28: Superman Revoked

Last week, as you’ll remember, I talked about how DC Comics once again, inadvertently, found themselves victims of poor timing by publishing a story that didn’t set too well with some, in part because of its proximity to a real life event. The story, of course, was Superman renouncing his U.S. citizenship in Action Comics #900, a development that many would have had a problem with regardless of when it was published. Not helping matters, though, was the fact that this comic was released mere days before the U.S. military’s successful raid on the compound of Osama bin Laden in Pakistan. This was a mission that brought the pride of being American back to a level of visibility not seen since 9/11, so a story featuring a character considered to be an American icon turning his back on his country was not exactly in line with the nation’s current mood. 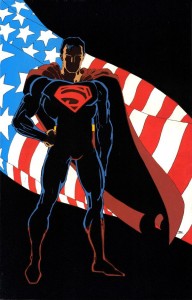 It must have been a pretty slow news week prior to the events of that military operation, because comic books rarely make the headlines unless the top story of the day is something along the lines of Donald Trump getting a mohawk, or Steven Tyler falling asleep on camera during American Idol. Had either of these been an actual occurrence, electrons would have been buzzing through Twitter faster than The Flash with an ice cube dropped down his shorts, and would have been seething with trending topics like #TrumpMohawk and #StevenTylerSnoozes, not #SupermanRevoked or #SupermanCommunist.

But, somehow, the comic did make the news, even though there are plenty of reasons why it still shouldn’t have. Reasons, you say? And plenty of them? What are they, you ask?

You know doggone well: I will tell you. 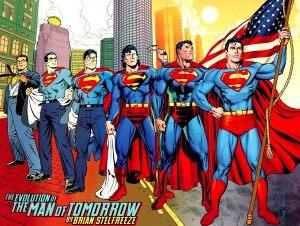 Another iconic, or ironic, image, especially considering how Superman threw away his citizenship only pages earlier.

It wasn’t the entire comic that made headlines, really, but only a mere nine-page backup story in a self-proclaimed “96 Page Spectacular”. The second-to-last feature among half a dozen. With nary a prior hint of such a development in DC’s solicitation for the book, a solicitation which instead focused on the character’s anticipated return to the comic and his climatic throwdown with Lex Luthor, who had hijacked the title for the past year. The solicitation did state that this feature “(would lay) the grounds for an insanely epic story”, but I’m pretty sure that was in reference to the current Reign of the Doomsdays arc, not Superman packing his bags and flying off to his place up north. And, the issue caps off with a (very cool) illustration entitled The Evolution of the Man of Tomorrow by Brian Stelfreeze, highlighting six incarnations of the character through various eras, right up to the present, which shows Superman standing tall and proudly holding . . . the American flag. Yeah; this is several pages after the story where Superman turns in his voter’s registration card. 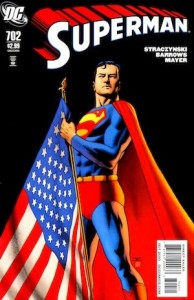 Superman #702 came out less than a year ago, and was part of the current Grounded arc, which even now still drones on. Pretty iconic image for a guy fed up with America.

Oh, and not to mention the year-long, and still ongoing, Grounded storyline in Superman’s other title, where he’s walking aimlessly across the nation in an attempt to connect with the average joe. Make that, average American joe, as he’s not taking a leisurely stroll across Canada, or Europe, or China. You can’t really do that if you’re now a citizen of The North Pole. And after spending the months it would take to hoof it coast to coast and bond with everyday Americans, he turns his back on them after a tiff with a government official. What a guy, Kal. Hard to believe you’re still married, with that kind of commitment.

So yeah; the story made the news, but the rest of the story did not. Whatever happened within the context of that nine-page filler piece, it’s pretty obvious that DC wasn’t really playing this up as much of an event, something that those looking for news pretty much missed. It was a story of words, as Superman merely jaws it up with the U.S. National Security Advisor, but certainly one that doesn’t speak as loudly as the character’s other, um, actions within the comics, and DC’s own behind the scenes. Outside of that backup, DC has done nothing to reaffirm that anything will ever come of this. They might have well printed “Just kidding!” on that Stelfreeze illustration. 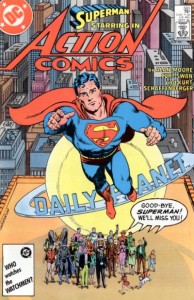 Had Superman left the country, DC could have reused the cover from Action Comics #583, 1986. The final issue before the character's LAST reboot, hmm . . .

In fact, they’ve not only not reaffirmed it, they’ve done the exact opposite; ComicBookMovie.com has reported that DC has now distancing itself from this story, with the publisher stating that “This short story is just that, it will not be followed up upon. Superman will remain as American as apple pie.” Well, that sure was the fastest DC retcon in history. At least, up until the recent announcement regarding the biggest retcon in DC history. No wonder DC disavowed it; for it sounds like none of their current stories will be followed up upon. In actuality, it just looks more like they never took this story all that seriously in the first place, and perhaps now we know why. For if they had, there probably would have been another year-long event leading up to it, and there would have been teaser images showing Superman turning his back on the flag or longingly flying away from Metropolis or something. And taglines reading something like “Truth and Justice No More” or “Superman: A Man Without a Country” would have been everywhere.

And apparently, President Obama never got the memo about Superman’s resignation, as he puts out the call for the Man of Steel to help his country in the very next issue of Action Comics. In fact, it looks like he didn’t get the memo on the nature of the crisis, either, since it was actually a worldwide, extinction level threat. Maybe this was the point Superman was trying to make; that he should be dedicated towards saving the people of Earth, not just America. Still, he had done it lots of times before, and it’s a pretty safe bet that his effectiveness at stopping a giant alien ship from plummeting towards that planet would be the same regardless of the status of his citizenship. DC was probably just trying to dot all the i’s after changing their minds, but one instead has to cross their eyes, really hard, and then it kinda sorta makes sense. 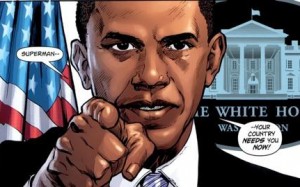 President Obama seems to think it's all about America, but hey, as long as Superman answers . . .

So if it weren’t a slow news day, and if the U.S. hadn’t launched such a critical military strike immediately thereafter, DC probably just could have sat in their offices with their heads down with little if any chance that this story would have generated any kind of notice. But since it did, they had to quickly stand up and quash it. Along with the rest of the DCU. Towel please, move on.

Or maybe it wasn’t a matter of not taking the idea seriously; maybe they attempted to but just didn’t think it through. After all, if not in America, where would Superman live? His fortress? Sure; nothing like being a citizen of the world by living in the most remote area on it. Would he hop from country to country, being a one-man Superman Inc.? Maybe there’s a recently vacated compound in Pakistan he could move into. And what about Clark Kent identity? And his marriage? 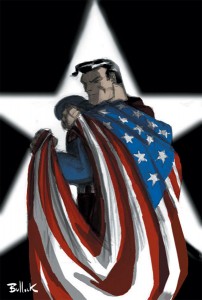 Dave Bullock's pinup from Action Comics #800, 2003. Funny how things can change in a mere hundred issues.

And what about the message? Whether you buy into the pre-Crisis origin (where Kal was born on Krypton and therefore, an immigrant or even a refugee) or the post-Crisis (where he was “born” in Kansas after his birth matrix thingy landed, and therefore an American citizen), Superman represents the achievement of the American Dream. Clark was a unique kid raised by adoptive parents, taught core values, and grew up to be the best person he can possibly be. If you don’t believe that to be solely an American thing, look at all those Elseworlds books where he was raised by the Soviets or Darkseid or whoever; he’s certainly not a paragon of American values in those stories. An idea that entails an icon of the United States of America turning his back on the very same country that gave him the very opportunity to be that icon deserves to be aborted. It’s like sending the Statue of Liberty back to France. 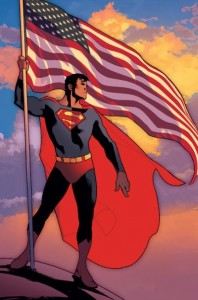 And the whole Superman wanting to be a “citizen of the world” thing? The supposed justification for this ill-conceived notion? Ridiculous, and unnecessary. The character doesn’t have to be denationalized and go rogue in order to provide assistance to the world, anymore than, say, the American Red Cross does. And last time I checked, it appears that the U.S. government itself already kind of fills that citizen-of-the-world role, providing everything from humanitarian assistance to military intervention. So if that’s the kind of role Superman wants, then he’s already living in the best country to fulfill it.

So whether the idea was just a throwaway, or if it was seriously considered and abandoned, things just would not have gone down very well had it been implemented. DC would have put themselves in a no-win situation, trying to justify Superman no longer being an American at a time when the American flag is flying proudly in the wake of a monumental victory.

If DC wants to entertain the idea of Superman losing his status as a U.S. citizen, perhaps they should initiate a storyline where, say, Lex Luthor demands to see a birth certificate. Hey, we have a whole new DCU coming up; anything’s possible . . .