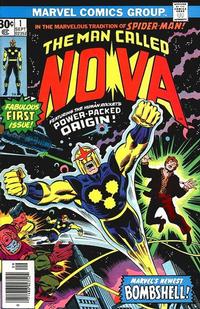 This week I spotlight Nova # 1, from Marvel Comics. It’s cover dated September 1976, and features a pretty nice cover by Rich Buckler and Joe Sinnott, signed as B/S. With Marvel’s typical hype, it proclaims: “This is the Fabulous First Issue” and it is “in the Marvelous tradition of Spider-Man”. “It’s Marvel’s newest Bombshell!”
The story itself, is simply entitled; “Nova”! It’s written by Marv Wolfman, with pencil breakdowns by John Buscema and Joe Sinnott provides the finished art and inks!
The story starts in space, in orbit above the Earth, the wounded Centurion, Nova-Prime, must find/choose a successor to assume his abilities and mission. The scene immediately shifts to an Earth playground where we meet High School student, Rich Rider, who has just had a girl beat him on the basketball court, causing his team to lose. He is then knocked/thrown down by a fellow teammate named Mike Burley. He receives some sympathy from fellow classmate, Ginger Jaye, who takes him to Uncle Fudge’s ice cream parlor to drown his sorrows in an ice cream soda.
In the meantime, Nova-Prime searches Earth for someone to replace him and, you guessed it, he chooses Rider! Rich is struck by Nova-Prime’s energy beam and ends up in the hospital. While Rich is comatose, Nova-Prime communicates with him and explains what has happened and what is now expected of Rich! Nova-Prime has granted Rider all his powers, but has tasked him with capturing the conqueror, Zorr! Chapter two has Rider back in school and facing his tormentors, once again during the school day, but once home, he transforms into the costumed, Nova for the first time!
Chapter three has Rider learning to use his newly gained powers. For example he can now fly, like a “human rocket”. He also discovers his helmet can pick up radio signals, like a police band radio. Just before the end of chapter three, the scene shifts to Ginger outside, Marvel Burgers (nice touch), where she is hanging out with Donna Lee Dover and Mike Burley. They spot Nova flying across the sky and decide to follow him, though they are not seen again this issue!
The fourth, and final chapter, shows Nova challenging Zorr, who doesn’t realize that his challenger is not Nova-Prime. Zorr and Nova battle for three pages until Zorr mysteriously vanishes, leaving Nova, once again returned to his Rich Rider guise, to wonder exactly what happened to Zorr, though the reader finds out on the last page of the comic, even though Rich is left to wonder!
The story ends with Rich vowing that his “powers must always be used for justice … no matter what the risk … no matter what the danger. For that is the destiny of … Nova!” Not quite as catchy as Spider-Man’s “With great power, comes great responsibility”, but not bad. The story is pretty good and the art better than average, but all in all, it’s a Spider-Man want to be! It was Marvel’s attempt to catch lightning in a bottle a second time. It didn’t work, but the character of Nova is still around today, so it wasn’t a complete bust. I give this comic three (3) out of five (5) Legion Flight Rings! Not great, but not bad, either!
Category: Comic BooksBy Greg TurnerJune 3, 2011Leave a comment
Tags: Retro Review