“Change; real, permanent change; is on the way. Changes that will affect our top line of heroes.”

If you guessed that quote was from DC Comics regarding their revamp of the DC Universe, then congratulations; you’re correct. Come on in and pick up your free Flashpoint button.

But that quote was not regarding DC’s Flashpoint event, nor even the upcoming and far more discussed relaunch of its entire superhero line. So, on second thought, please do not come in to the store and ask for a free button; I’m not in a position to be giving away Back to the Past’s merchandise, anyway. 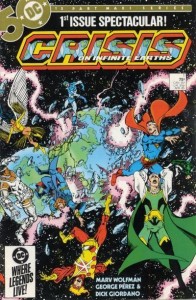 Remember this? The FIRST time DC promised what it's promising now? And look what it's come to . . . 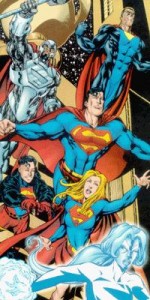 So where was that quote from? I will tell you. That quote came appeared way back in 1984, as part of an editorial by Marv Wolfman in the first issue of Crisis on Infinite Earths, the first DC “event” that was intended to make the DCU a simpler, friendlier place for readers to visit. Which, it most definitely did, by eliminating the concept of a multiverse; a concept beloved by a generation of established DC readers but one that was headache-inducing for its writers and editors and made trying to tell a story the creative equivalent of trying to swim with a bag of bricks tied to one ankle. CoIE also simplified the concept of Superman, paving the way for John Byrne’s subsequent reboot, and killed off characters like Barry Allen so that a new generation of readers could enjoy modern versions of classic characters like The Flash.

Of course, twenty five years after Crisis, there’s now a new version of the multiverse, Barry Allen is back from the dead, and there are enough characters with the Superman logo on their chests to form their own offensive line. So much for “real, permanent change.”

Nothing against Wolfman, or any of the other creators involved in shaping Crisis. I’m perfectly willing to believe that all involved fully intended for the changes established in CoIE to be permanent. And believed that they would remain so. And to be fair, any change that lasts for the better part of a generation can arguably considered to be permanent, in the world of comics. 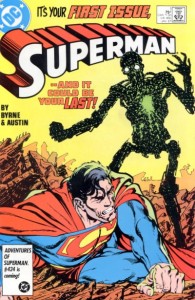 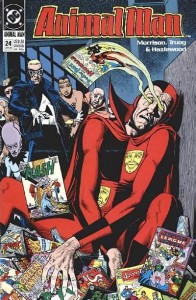 Grant Morrison didn't undo Crisis by himself, but he sure helped.

It didn’t take long for things to get muddled up again; ironically, Byrne himself was among the first, if not the first, to convolute things a bit with the whole “pocket universe” thing he introduced early in his Superman run. Grant Morrison tampered continuity during his awesome run on Animal Man shortly thereafter. Things had gotten confusing enough within the next decade that DC decided that they had to try and fix what they screwed up, which was the genesis of their next continuity-altering event, Zero Hour. Which, unlike Crisis, didn’t really fix anything; in fact, it ticked off a lot of fans, and it made things even more of a quagmire; just ask any fans of Legion or Hawkman. Of course, like a drunk with a chainsaw, DC later thought they really could fix things given another chance, which they claimed the whole Hypertime concept would do. And virtually no one understood what that was supposed to be, so it was completely ineffective to the point where it was already being ignored a few years later. 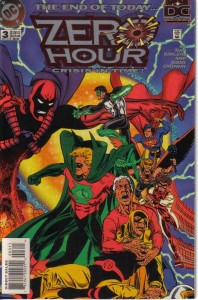 Zero Hour did little except piss off Legion and Hawkman fans. Oh, and JSA fans, too.

Crisis wasn’t a perfect fix, but it was a pretty good one. And in truth, it was the only one we had. It could have laid the groundwork for a far more accessible DCU, had the ground rules been followed by future editors.

Here’s another quote for you: “Our characters are always being updated; however, this is the first time all of our characters will be presented in a new way all at once.”

That quote, as many have already seen, is from DC’s Senior Vice President of Sales Bob Wayne, regarding the upcoming relaunch. “This is the first time our characters will be presented in a new way”? Boy, does that sound familiar.

The truth is, today’s DCU isn’t really any more friendly to new readers than it was when Crisis was deemed necessary to clean it up in the first place. It got fixed once, but it broke again a long time ago. It’s time for change; real, permanent change.

Yes, to the characters, sure. But more importantly, to the way mainstream publishers have long published solely for its existing, and shrinking, fanbase, while doing little to truly expand it. If the industry is to survive for the span of another generation, it’s going to have to chase after not just this generation, but also the next one. Kids obviously don’t think Superman and Wonder Woman are as cool as we do; otherwise they’d be buying these comics already. In fact, many see those characters as ones that their dad or even, gasp, their grandpa read. And that’s a kiss of death for any industry seeking to cater to the younger market, as every such business should do if it wants to survive.

So perhaps DC has finally recognized that their lineup does need to be tweaked to broaden readership. Therefore, they have my tentative and skeptical support for this initiative. And that support isn’t more solid only because we’ve all seen this kind of thing before. A great plan, waylaid by the industry’s pervasive instinct to look backward, not forward. To preach to the converted, and not the unenlightened. To publish what they liked as a kid, not what today’s kids might.

This relaunch cannot be allowed to meet with the same fate. If there is to be change, it was to be actual, lasting change.

You know; the real, permanent kind we were promised the first time.

Category: Comic BooksBy Jim JohnsonJune 14, 2011Leave a comment
Tags: I Will Tell You