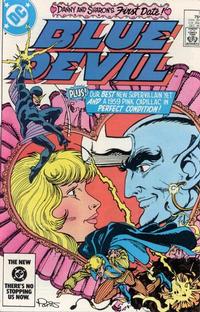 Greetings and salutations!  This week’s Retro Review looks at D C Comics Blue Devil # 1, cover dated December 1984.  It’s got a great ‘romance-style’ cover by artist Paris Cullins announcing that the book features Danny and Sharon’s first date!  Wow, that certainly would have had the young boys lining up to buy this comic, wouldn’t it?  I’m not sure that D C really knew how to market their comics then, or even today, with their big bombshell last week announcing the relaunch of their complete line with fifty-two (52) new number one books!!

But back to the review.  The story is entitled; “Just Another Day in L.A.” and is written by the team of Gary Cohn and Dan Mishkin and drawn by guest artist, Gil Kane.  It opens on James Jesse, the Trickster, rather than on the hero, Blue Devil.  The Trickster is running from some ‘bad guys’ who are after him for some reason.  The bad guys have sent some armed goons, as well as, a back-up, flying platform, costume wearing guys, and as their ace in the hole, a new super assassin, Bolt!

In fact the first six pages all feature the Trickster and it’s not until page seven that we see the hero of the book, Dan Cassidy, the Blue Devil!  And where do we find him?  In a clothing store, along with Marla Bloom and Wayne Tarrant, shopping for a new suit that will fit him, so he’ll have something to wear besides his costume, on his date with Sharon.

For those unfamiliar with the Blue Devil, he is stuntman, special effects expert, Dan Cassidy, who was hit be a blast of supernatural energy.  Dan created an outfit for the character of the Blue Devil for a movie. The Kevla costume was not only strong, but it was made to be flexible, so it could handle rigorous stunts. It was powered by miniature servo motors to add strength. 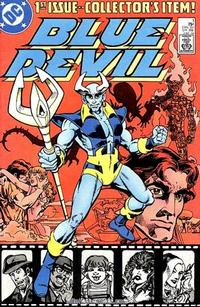 During the shooting the Blue Devil suit performed perfectly. Unfortunately a demon named, Neboris, interrupted the shooting of the film. While fighting the Blue Devil, Nebiros, assumed he was a fellow demon. So when the fight starts going bad for Nebriros, he zaps the Blue Devil with a blast intended to drain his occult energy.  When the battle is over Dan Cassidy finds that his suit is a part of him. He discovers that the suit is organic and part of his body. Dan Cassidy is very upset about what has happened to him, but because of his powers, he ends up being a reluctant hero.  This origin was told in Blue Devil # 1, cover dated June 1984.

But back to issue number 7, Blue Devil finds a suit and a few pages later takes Sharon out on their date, only to have it interrupted by the Trickster who seeks out Dan an tries to enlist his help!  We get the pleasure of seeing Gil Kane draw another nice fight scene between the Blue Devil, the Trickster and the Bolt!  Not only do they tear up the restaurant Dan and Sharon were dining at, but Bolt destroys Dan’s new suit, only to teleport to safety!

Which leave us with a story to be continued in the next issue of Blue Devil!  All in all not a bad issue, it even features a Flintstones gag, you’ve got to see to believe!  The series only lasted thirty-one (31) issues, but it was fun while it lasted.  You could certainly have done worst than spending 75 cents on this comic back in 1984.  Though I’ll only give it two (2) out of five (5) Legion Flight Rings for this Retro Review!  It was a fun book, while it lasted!