I Will Tell You #5: Motown Has a Comics Scene! 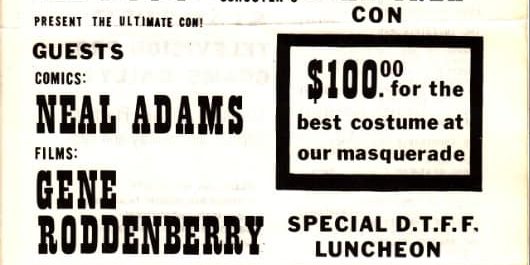 OK, quick: if someone wanted to buy a comic book, where would they go?

The answer to that question would be significantly different depending upon the era it was asked. In 1950 or so, near the historical peak of U.S. comic book circulation, the question might have elicited some pretty sarcastic responses. After all, newsstands were abundant, and could be found anywhere and everywhere, from any given street corner in an urban setting to the mom & pop stores in more rural areas. And in those days, most all of them would stock comic books along with magazines and newspapers. It wouldn’t be much of a stretch to infer that if someone had asked such a question, they probably really had just gotten off the boat, lived in a cave for the past thirty years, or hit their head pretty hard recently.

Today, the answer would probably be far less acerbic, because it isn’t really so obvious anymore. Despite the increasing presence of trade paperbacks in mass market bookstores and limited outreach programs like Free Comic Book Day, there are many who have no idea that actual, periodical comic books are still being published, let alone where to find them. If one of these uninformed people were asked, they’d find the very question itself to be rather odd, to say nothing of the person asking it. They’d probably wonder if that individual had hit their head pretty hard recently.

Perhaps things haven’t changed so much, after all.

And in a sense, they haven’t. Comics by and large remain available to anyone who wants them, although the number of seekers has greatly diminished during the past sixty years, and the venues that can fill this demand have largely faded from prominence and are nowhere near as prolific as they once were. And in truth, comics wouldn’t even be available in these reduced numbers nowadays had the steady drop-off of casual readers that began in the mid 1950s not been at least partially offset by the rise of semi-organized fandom that started around a decade later.

Comic book fandom’s rise was in no small part spawned from the dedication of the Kansas City-born Jerry Bails, who many longtime comic fans acknowledge as the father of comic fandom. Bails’ passion and lifelong enthusiasm for comic books inspired him to launch a fanzine called Alter Ego, one of the first comic book fanzines, in 1961 shortly after he moved to Detroit to take a teaching job at Wayne State University. Such fanzines were one of the early tools that allowed fellow comic book fans to stay in touch and discuss comics in a more far-reaching public forum than local comic book clubs or pen pal relationships would allow.

In 1964, with comic book fandom taking root, Bails helped organize a small comic book convention that was a precursor to what became known as the Detroit Triple Fan Fair, when Bails and fellow Detroiter and comic book enthusiast Shel Dorf took over the event the following year. The show was thusly named as it also catered to fans of science fiction / fantasy-related books and films. The DTFF has long been regarded as the first convention of its kind, and featured high-profile guests such as artist Jim Steranko and Star Trek creator Gene Roddenberry. The mostly-annual show ran for over a decade, although Dorf’s involvement with the show ended when he moved to San Diego in 1970, where he in turn founded another comics-centered convention that’s now known as the Comic-Con International: San Diego. Many speculate that had DTFF not been a success, the San Diego Comic-Con might never have come into existence. 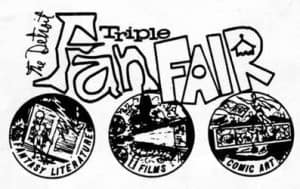 Many of the Detroit-area fans that attended some of these Fan Fair shows went on to become big names in comics themselves, among them Terry Austin, Jim Starlin, Rich Buckler, and Keith Pollard. The tie between the area and the shape of comics is strong; Detroit has not only given birth to comic book fandom, but also to a lot of the creators that make these comics in the first place.

Dennis Barger Jr, proprietor of Wonderworld Comics in Taylor, MI, acknowledged Detroit’s important place in comics history. “Maybe if we had a bigger media (presence), Detroit would have been the epicenter for comics. But the big publishers kept coming in and stealing our Detroit boys and taking them to New York. Look at Jim Starlin; he got hired and sent there to work for Marvel.” Barger also cited DTFF as the first comic book convention that (Bongo Comics co-founder) Bill Morrison ever attended.

If comic book fandom’s organization was the spark that ignited the idea of comic conventions, its growth was the fuel that has sustained them. Even as DTFF’s days were nearing their end, other metro-Detroit area shows were popping up. Over the years, local organizers such as Stu Shapiro, Gary Reed, and Mike Lesterwould coordinate gatherings of various sizes around town. More such shows were starting nationwide. And Dorf’s San Diego Comic-Con had grown some serious legs and was on its way to dwarfing any other event of its kind. And by this time, in the mid-1970s, fandom had grown to the point where it would support a revolutionary new business model for comic book distribution: the direct market, which gave an industry that had been dying a shot in the arm that allowed it to grow despite publishing for a much smaller readership.

Today, most estimates put the number of comic book specialty stores in the U.S. around 2000 – 3000, and virtually every large American city hosts at least one comics-related convention each year. Replacing the newsstands from decades ago, these are the modern day venues where those looking for comic books will find them.

Metro Detroit has been no stranger to hosting large comic book conventions, and in fact is still home to one of the larger such shows. Next week, more on the origins of Motor City Comic Con, as well as Barger’s new convention, the upcoming Detroit FanFare.

Category: Comic BooksBy Jim JohnsonOctober 1, 2010Leave a comment
Tags: I Will Tell You