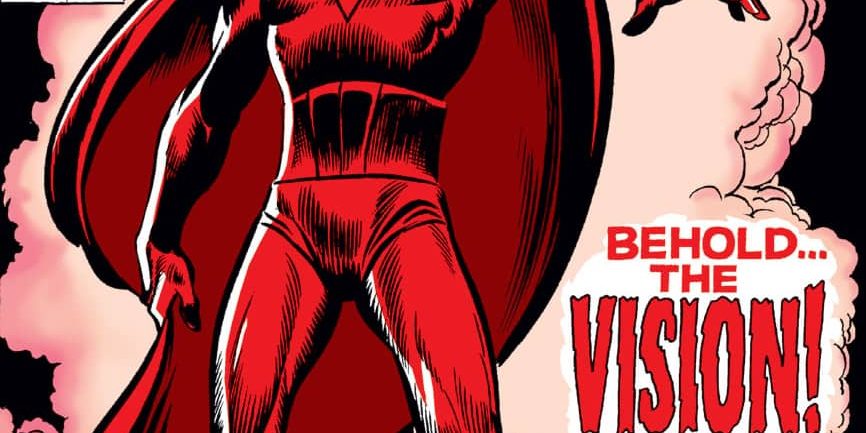 For this week’s Retro Review, let’s take a look at Marvel Comics Group’s The Avengers # 57.  This is the comic that introduced the Vision to the Marvel mythos!  It’s got a wonderful symbolic cover of the Vision towering over the Avengers, done in a completely red hue, by the great John Buscema!  The story is entitled; “Behold … The Vision!”, which was written by Roy Thomas, with interior art by John Buscema and George Klein.

The story opens with a mysterious caped figure walking through the dark in the pouring rain. Then by the light. created by a lightning bolt, the reader first sees the red faced Vision, attired in green and yellow, as he soars to the rooftop of Avengers Mansion.  He enters through a terrace and threatens the Wasp.  He uses his “thermoscopic eyes” on her like a heat ray, but before he does any real damage he cries out and collapses!  Hank hears and as Goliath, races to her.

The scene shifts to Hawkeye and the Black Widow, then to the Black Panther before Hanl Pym summons them back to the Mansion, where Hank revives the Vision, who immediately attacks the Avengers, as a whole.  The Vision is eventually subdued and he reveals that he was created by Ultron-5 for the sole purpose of destroying the Avengers!  Of course he now no longer feels under Ultron’s power and agrees to lead the Avengers back to Ultron-5.

Of course, this is all part of Ultron-5’s plans, so he will be the one to destroy the Avengers.  He defeats the Avengers and places them in a room where the walls are collapsing in on them and will crush them!  The Vision goes face to face with his creator and causes Ultron-5 to destroy himself, thus saving the Avengers!  Roy Thomas ends the issue with the famous poem Ozymandias by Shelley: ” I met a traveler from an antique land …”.  Who says comics are literature?

An excellent issue from a classic run of a classic Marvel comic.  I give this issue four (4) out of five (5) Legion Flight Rings!  And I’d be lying, if I said The Avengers wasn’t my favorite comic book series of all-time!