I Will Tell You #7: Motown Has a Comics Scene Part 3 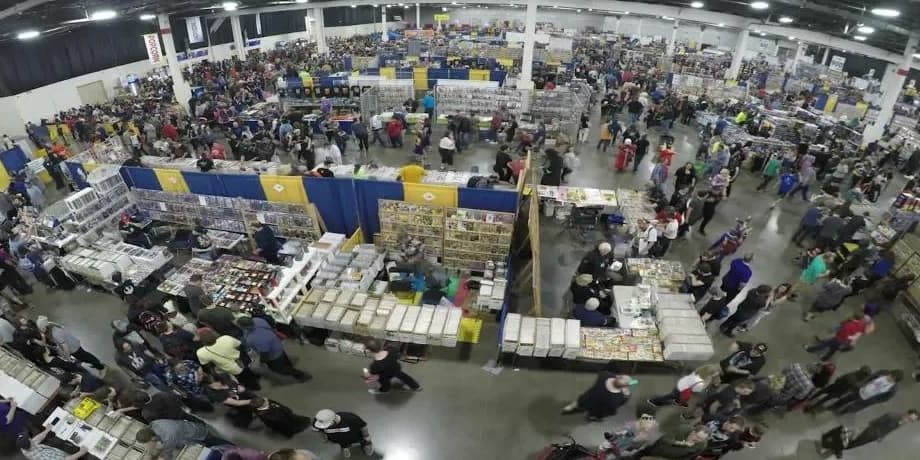 Part 3 of 4: The New Convention Landscape

It didn’t take long after it was announced that Detroit FanFare appeared perched and ready to pounce into the four-year void left by the demise of the fall Motor City Comic Con. But recalling how the fall show often struggled to draw a crowd, it’s arguable as to whether there really was much of a void to fill at all, especially in an economic climate as troubled as Detroit’s. And it’s at a time of year that many already regarded as a slow time for comic sales, no less.

Retailers have often stated that sales weaken after the start of the school year and into the fall. “Halloween weekend in the store has been notoriously bad for me, business-wise,” stated Big Ben’s Comix Oasis owner Ben Davis. “If not the worst, it’s one of the top two or three worst weekends for sales in my store.” But, there are other retailers who report this is not the case for them. “This summer has been kind of slow,” reported Katie Merritt, co-owner of Green Brain Comics in Dearborn. “But we usually pick up in the fall because of where we’re located; we’re right by U of M Dearborn, Henry Ford Community College, we’re ten minutes away from Wayne State, so we tend to see an uptick when school starts.”

Merritt’s observation could indicate that Detroit FanFare would benefit from being held in a college area in the fall, the same way her store has, a benefit that a show held in Novi wouldn’t have. And the old fall show was often seen as a watered down version of the spring con, which wasn’t exactly a huge selling point to many potential attendees. So it’s possible that the excitement of a new con in a more central location could draw an audience that had previously been thought to be too small to support such an event.

But even if the local market can support one fall show, can it support two? A few weeks after Detroit FanFare was announced, Motor City Conventions’ website announced the return of its own fall show. And if that wasn’t surprising enough, the dates originally announced were the same as Detroit FanFare’s. This generated a lot of buzz about dueling cons, and a lot of assumptions and rumors that this con was scheduled as a kneejerk, retaliatory move, that MCC’s Michael Goldmanwas out to destroy Detroit FanFare, and that the so-called “Spite Con” was scheduled solely to stick a burr in the shorts of FanFare founder Dennis Barger Jr.

As of this writing, Motor City Conventions has not returned any phone calls requesting comment on this. However, while it’s possible that this show was indeed scheduled in response to Detroit FanFare, it’s just as likely that planning for both shows had been occurring in parallel, and Barger simply announced his first. But Jeff Serling, who worked for MCC in the past but parted company shortly before the spring show earlier this year, denies that any plans were being made for a fall show in Novi at the time of his departure. “In no way was there ever a show intended for the weekend of Halloween,” insisted Serling.

About a month after Motor City initially announced their fall show, the dates were changed from that weekend to November 20 & 21, according to their website, with no reason given. An unconfirmed source who had spoken with Goldman reported that the show’s dates were moved because of the difficulty in booking guests, as many of the regulars who typically appeared at MCCC had already signed on with Detroit FanFare. And according to Detroit FanFare’s website, many of these mainstay guests, such as Guy Davis, Matt Busch, andRandy Zimmerman, are indeed scheduled to appear there. Currently, Star Trek actor Brent Spiner and artist Frank Choare scheduled to appear at MCCC.

So while these two shows are no longer going head to head, debate remains as to whether enough room still exists on the convention landscape for both to peacefully co-exist. In a climate that only a year ago had no such show, many feel that it will be a challenge for an economically depressed area to support either one of these shows, let alone both. There are those on both sides of the exhibitors’ table who face choosing between one or the other, not for scheduling reasons but instead for economic ones.

Acknowledging the depressed Detroit area economy, locally-based Pop-Art Funnies creator Marty Hirchak stated, “Not every collector has the budget to go to both shows. (Detroit Fanfare) has the curiosity factor; everyone’s going to want to see the new show because it’s new, but diehard fans who have been supporting (Motor City Comic Con) for 20 years are going to want to be a part of that, too. I’d love to go to both of them, but I can’t.” Hirchak had yet to decide which if either show he was going to attend or exhibit.

“I think it’s bad for the industry,” commented Michigan-based IdiotHead.com’s Adam Talley, who is exhibiting at Detroit FanFare and considering setting up at MCCC. “We’re all in this together. We’re here to make books and entertain people. I don’t like picking sides. These fights tend to

destroy rather than construct something good for the industry. I hope this doesn’t cause any problems for the local scene. We’ve got a really good community going, as far as creators working together. If there’s any sort of tension over this whole thing, I hope that it doesn’t transfer over into any of the shows going into 2011 and beyond. I don’t want to pick a show for a business reason and cause bad blood for picking one over the other. I hope that we’re better than that.”

Ben Davis, on the other hand, already plans on exhibiting at both shows. Despite this, Davis believes there are simply too many conventions already, and remains unconvinced that he can do any better at either con than he did previously at Motor City’s original fall show. “There are good ideas from both sides,” Davis admitted, but pointed out that luring people to shows with guests can backfire on retailers. “Dennis Barger is bringing in a superstar comic name, but I just don’t know that a superstar comic name is as big as a superstar pop culture name. Is Stan Lee as big a draw as William Shatner?” Davis was speaking hypothetically; Shatner has not been announced as a guest at MCCC.

“I’ve seen absolutely great guest lists kill dealers,” Davis continued. “The last Pittsburgh show that Stan Lee was at? I was (also) at that show, and it was great, attendance-wise, but one of my poorer shows. It had a great guest list, and everybody spent their money on getting autographs. The media guests sucked up all the money out of the room. I had one of my customers come out to Pittsburgh and he got six Stan Lee autographs. I couldn’t have talked him into buying a stick of gum after that.”

So with two new shows imminent, local exhibitors clearly share some apprehensions regarding their expectations. But a lot of this apprehension is rooted in an inherent assumption that the two shows are competitors. Is this a valid assumption when one show bills itself as a comic book show, while the other is regarded as a pop culture show, and are being held weeks apart? This will be examined in next week’s conclusion.

Category: Comic BooksBy Jim JohnsonOctober 15, 2010Leave a comment
Tags: I Will Tell You