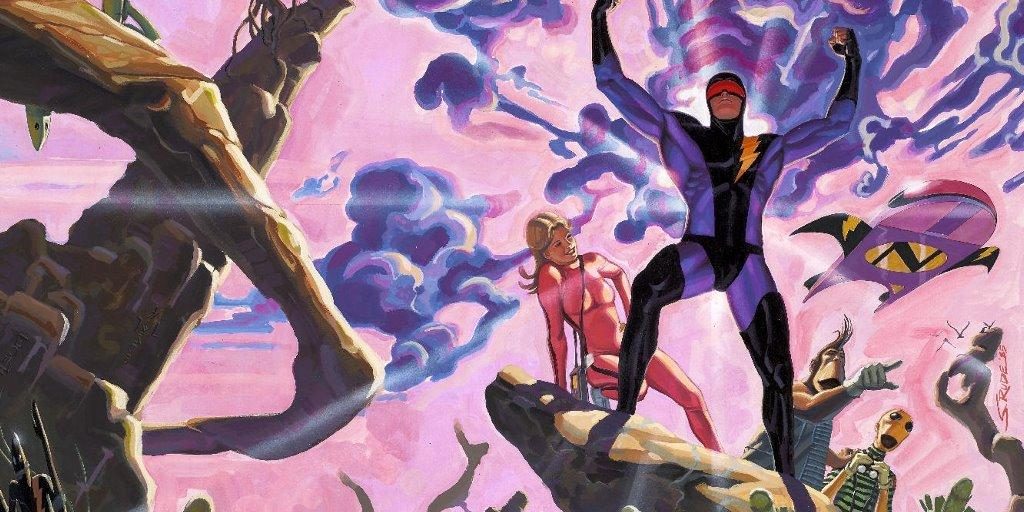 The comic is written by Mike Baron and drawn by Steve Rude.  Rude did both the pencils and the inks, as well as, lettered the comic too!  The concept was all Baron’s though.  The original three mini-issues and the first six color issues were published by Capital Comics.  With issue # 7 of the color series, First Comics began publishing the series due to the demise of Capital Comics.  They published it until the end of the series, with issue # 80 in 1991.  The series continued in various mini-series from that time even through a year or two ago. 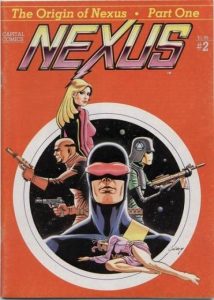 But back to this review; Issue # 2 & 3 brings us Nexus’ origin.  Issue one introduced Nexus and shows the reader that Nexus dreams of the crimes committed by mass murderers, and how he is driven to track down and mete out justice to said murderer!

Issue 2 picks up immediately after he has tracked down Zieffer Meird.  Meird’s wife commits sucide so that she will be waiting for her husband when he is dispatched by Nexus.  But Nexus witnesses this act and stays his hand, figuring Meird’s loss is punishment enough.  Nexus returns to the Planet Ylum and the Earth reporter, Sundra Peale, who is waiting for his return.

Political intriuge abounds and we see a secret plan put into effect to steal Nexus’ secrets by a believed friend, Sutter LeBerq.  Nexus’s home is broken into and his friends attack the intruders.  All but one is killed and that one seems to have lost his mind after viewing something in Nexus private bed chamber.

Nexus blames another one of his friends for using excessive force on the intruders, which causes further unrest.  While dealing with all this, Nexus decides to give Sundra the scoop she’s come all this way to uncover and he begins to tell how he came to be, beginning with his father, General Theodore Hellpop and how he met his wife, Nexus’ mother, Donita Marlis Esperanza.  And how her brother was a revolutionary who tried to prevent General Hellpop’s mission to save the Planet Vradic.  Ultimately Hellpop destroyed the planet to save it.  Don’t ask, just go but the comic!

General Hellpop sets sail into a Black Hole as punishment, but survives and is drawn to the abandoned Planet, Ylum.  And that’s where Issue # 2 ends.

Issue 3 picks up the narative there, detailing the birth of Horatio Hellpop, who will one day grow up to become Nexus.  The story details the death of his mother, and the advent of a mysterious malady which causes Horatio to dream of mass murderers, starting with his own father, who killed millions of people to “save” the Planet Vradic.  Eventually Horatio finds relief when he kills the murderer, his own father!  All this Nexus reveals to Sundra, who he begins to fall in love with. 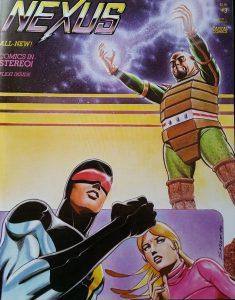 Sutta LeBerq returns in issue # 3 to challenge Nexus, powered by thousands of decapitated heads!  Actually a pretty cool, though gross idea!  Nexus defeats Sutta and saves the heads and plans to have them relocated to Ylum.  But during their battle a number od suns were destroyed and Earth Central believes that Nexus was the cause, which sets up the next issue. Quite a fast-paced beginning to a science fiction based super-hero comic!

One more interesting note is that issue # 3 contained the first ever flex-comic.  This is a flexible record bound into the comic.  As I never removed mine from the comic, I have not listened to it, therefore can’t comment on it.

The origin revealed in these two issues did not reveal the fact that Nexus received his power from an alien entity, called the Merk, who, as payment, required Nexus to seek out and kill a certain quantity of human mass murderers per “cycle”.  That was revealed much later in the series.

I give the origin of Nexus two issues (#s 2 & 3) a rating of four (4) out of five (5) Legion Flight Rings!  The first three issue mini-series is well worth searching out and purchasing for your collection.  And the good thing, is that these first three issues are easily available on eBay and at reasonable prices to boot.  These comics also have been reprinted in the Nexus Hardback reprints, as well.