Lest this column whither on the vine, I’ve decided to share it with whatever limited audience BTTP’s as-yet still-veiled website has. There are no links pointing to this post, so if you found it, you’re either one of my colleagues, or incredibly lucky. So here’s something I thought I’d never write: a Green Hornet column. Have at thee.

When I say “highly-anticipated”, I don’t mean that’s a good thing. Maybe “feared” is more like it. And I don’t really mean “funny” in that positive sense, either. When the announcement was made that Rogen was going to be cast as the lead character, that thunderous groan heard worldwide was the collective disdain being voiced by fans of the old Van Williams TV series as well as comic fans in general. It was a frighteningly similar sound to the one heard over two decades ago, regarding the also highly-anticipated Tim Burton Batman film, when it came down from on high that the comedic Mr. Mom and Beetlejuice himself Michael Keaton was selected to play Bruce Wayne / Batman.

Batman, even prior to the casting announcement, was also nervously anticipated initially, at least by us comic book fan types. Because the last superhero movie that had been bestowed upon us, Superman IV: The Quest for Peace, was so wretchedly vile that a gallon of Kryptonite mouthwash couldn’t rinse the bad taste from our mouths. And there was no reason to expect that Burton, who was best known for such offbeat comedy films like Pee Wee’s Big Adventure and the aforementioned Beetlejuice at that time, would give us any reason not to be nervous and put forth the kind of comic book movie we all wanted to see. But when the movie’s first trailer came out, that nervous anticipation turned to the positive kind, when it at least appeared that this movie was not going to be the goofy campfest that everyone feared it would be. 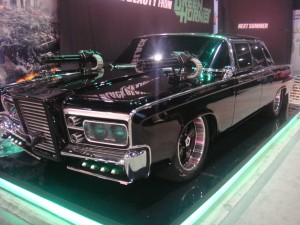 The Black Beauty made an appearance at the 2009 San Diego Comic-Con, but the movie did not hit theaters the following summer as the sign behind it promised.

But with Green Hornet, it was different. There wasn’t all that much hype generated when that project was announced, at least any more so than other movies of its kind. Which is probably the reason why; superhero flicks were a relatively rare occurrence a generation ago, so when such an effort actually made it into production it was plenty newsworthy on its own. But today, this kind of film is just one of many amongst a landscape full of past and proven successes. There is certainly no reason to expect any buzz on a film like Green Hornet, like there was with Batman hoping it would be “The One”, when the most recent successes in the Iron Man and Batman franchises are still fresh in our minds.

That is, there was no buzz until Rogen was cast. Then, the movie became news, at least in pop-culture circles. The thunderclap was deafening. Rogen’s a comedy actor; Rogen doesn’t have the body for it; Rogen’s all wrong for the role. Substitute Keaton’s name, and you have the exact same clamor that was heard 20+ years back. Both movies were condemned sight-unseen and already written off as disastrous by many.

But one notable difference between the two actors’ situations is that at least Keaton had a serious film called Clean and Sober in his resume, which proved that he could play a straight role, even if it wasn’t one of a billionaire playboy. This somewhat diluted fans’ ire and gave them some pause to stop the Saturday night quarterbacking and give Keaton’s movie a chance. What kind of exception like that does Rogen have in his career; Freaks and Geeks?

Another difference is the studio’s promotion of the two films. Cleverly edited movie trailers have been known to make snippets of Uncle Fred cutting the grass look like a summer blockbuster, but the Batman trailer went a long way towards putting a lot of the misconceptions about Keaton’s movie to rest. However, the spots for Green Hornet move closer to embracing a comedic aspect rather than shy away from it. I think the one TV ad showing GH and Kato rapping with the music cranked up in the Black Beauty kind of solidifies that notion. And Rogen, appearing on Today a week before the film’s release, said outright that it was going to be an action / comedy. 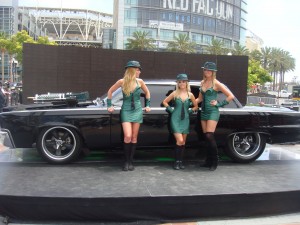 The Black Beauty returned to Comic-Con in 2010, this time with some, um, additional promotion.

So, here’s the funny part about this whole comparison that isn’t really funny, and it’s where things have come full circle. Adam West’s classic campy Batman TV series that defined the character for one generation gave way to Keaton’s dark, serious take that defined it for the next and brought the character back to its truer nature. But ironically, Williams’ more faithful, straightforward version of Green Hornet from the 60s is being sidetracked by Rogen’s apparently more lighthearted incarnation that’s supposed to be funny. Batman matured, but Green Hornet is devolving.

And, since release is still pending as of this writing, and not being one to judge on presumption, I’m willing to consider the idea that this movie just might well indeed be funny. The story, that is, or at least certain scenes within it. But the idea, of taking a character or brand and trying to shoehorn it into something that it’s not; that’s not funny. It’s anything but. Some would call it sad. Or wrong. Or cheap. Or disrespectful. Some would call it a re-imagining.

Re-imagining an existing property isn’t a bad thing, I suppose, but in my mind the jury is still out on whether it’s a preferable thing, over just coming up with a new brand that can be shaped into anything the creators want it to be. But had this been done, we all might have been commenting on how this new movie looks a lot like Green Hornet, only funnier, and asking why they just didn’t make a Green Hornet movie.

With this uncertainty bouncing around in my head, I’m willing to give this movie a fair shot, despite my own misgivings on the surface about Rogen as the lead and the comedic slant given to this film. It’s just that I feel like I’m trying to have a conversation with someone who keeps cracking jokes; I want to be serious, but I know eventually I’ll laugh, despite my best efforts.

Category: TV & MoviesBy Jim JohnsonJanuary 12, 2011Leave a comment
Tags: I Will Tell You