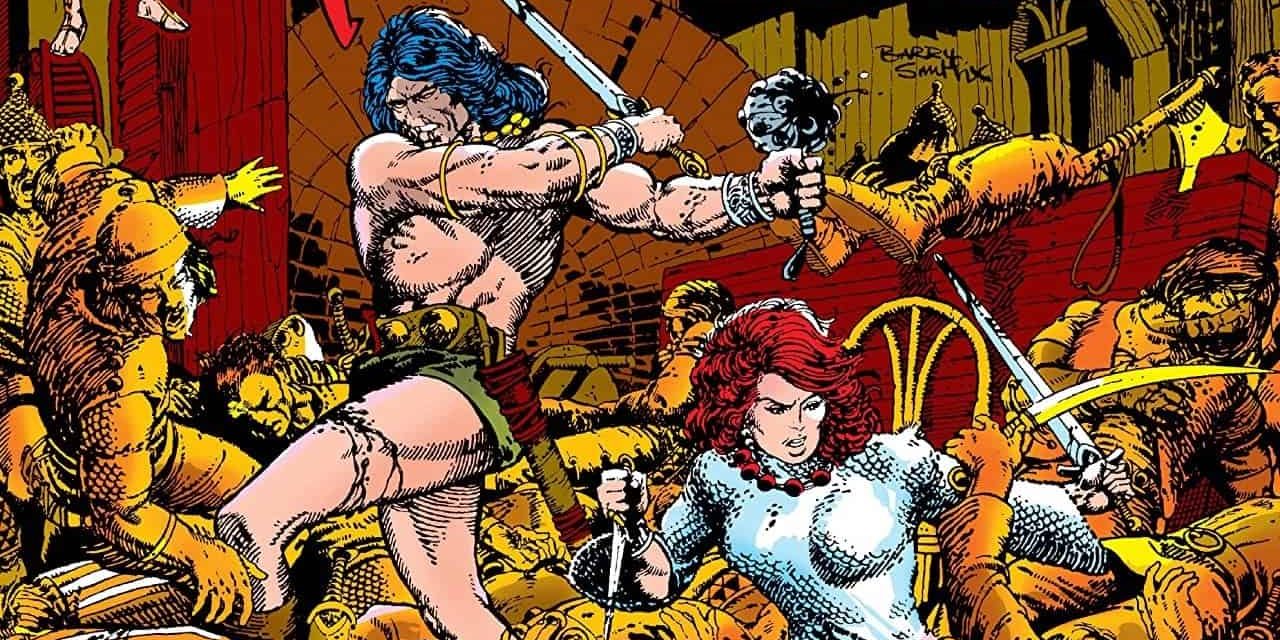 Cover dated March 1973, comic book and sword and sorcery fans found Marvel Comics’ Conan the Barbarian # 24 on the stands.  The series had begun a little over two years prior.  The writer/adapter was Stan Lee’s right hand man, Roy Thomas and a new-comer to comic book illustration, one Barry Smith, now-a-days, known as Barry Windsor-Smith, provided the artwork, when Marvel’s publisher Martin Goodman wouldn’t spend top dollar on artist, John Buscema, who Roy had in mind when he got the okay to do a Conan comic book.  His second choice was Gil Kane, but again, Mr. Kane commanded a top page rate and since Marvel had to pay a royality fee to Conan’s copyright owners, Roy had to go with an artist with a lower page rate.  Hence, newcomer Smith, was elected and given the okay as the new Conan artist!

The first couple of issues were a little weak, both in story and art, as Thomas and Smith got a handle on this new character!  But soon they were both turning out excellent work.  Roy provided both original stories, as well as, adaptations of Robert E. Howard’s stories and Barry’s artwork evolved from a “Kirby clone” to almost Renaissance quality work!  Hey, that’s my opinion anyway, but you’re free to disagree if you think otherwise.  But I feel strongly about it!

Actually Barry had previously decided to leave the book, after issue # 16, but after missing just two issues, he returned with Conan # 19 and provided his best work on the book, through this, his last issue (# 24).  This issue’s story is entitled; “The Song of Red Sonja” and it was written by the afore mentioned Roy Thomas and drawn by Barry Smith.  Barry provided both the pencils and the inks, as well as, the colors for this issue.

The issue begins in a tavern in the city of Makkelat, where Red Sonja, another Robert E. Howard character, who was introduced a couple of issues before, is dancing on a table to the cheers of many of the tavern’s customers.  A brawl ensues and Conan and Sonja flee the scene before the City’s guard appear to make arrests.  They pause to take a dip in a near by pool and Conan makes some advances on Red Sonja, but she rebuffs him, but does enlist his help in breaking into a particular tower to steal the jewels awaiting within.  She promises him his heart’s desire once they have completed the task.

With that promise ringing in his ears, Conan scales the tower and pulls up Sonja behind him.  They find the treasure trove as promised and Sonja sends him to check for guards while she locates a jeweled serpent tiara.  She plans to leave Conan there in the tower, but the tiara comes to life and she is forced to call on Conan for assistance.  Conan and Red Sonja battle the serpent and Conan suceeds in ‘killing” it, only to watch it return to a lifeless tiara.

As they flee the tower, Sonja sets the rope on fire and Conan falls, but not from a high enough height to do other than hurt his leg.  Red Sonja explains that no man’s lips will touch hers, except he who defeats her in battle, and she doesn’t plan to give Conan that chance.  She flees on horseback and Conan must hobble away on foot.  Another lesson learned in his education on women!

Of interest to collectors, Red Sonja’s story continued in Savage Sword of Conan # 1 magazine, cover dated August 1974, where she returns with the stolen serpent tiara, in a story written by Roy Thomas and drawn by Esteban Maroto, another wonderful artist, that I would have loved to have seen Marvel publish more of his work.

But this twenty-fourth issue of Conan the Barbarian was just about perfect, and a wonderful swan song for the departing Barry Smith!  I give it a full five (5) out of five (5) Legion Flight Rings!  If you don’t already own this issue, definitely plan to add it to your collection, or pick it up as a reprint, in the wonderful Barry Windsor-Smith Conan Archives # 2, that were published by Dark Horse Comics earlier this year!