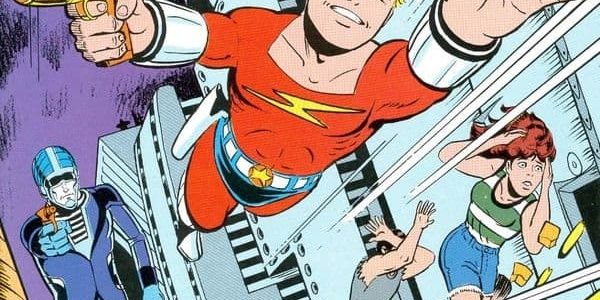 Eclipse Comics published Zot! #1, cover dated April 1984.   The cover is both penciled and inked by newcomer Scott McCloud.  Now twenty-five years later, Scott is more known for writing and illustrating the book Understanding Comics than he is for his comic book series, Zot! But at the time, this all ages series, was like a breath of fresh air on the comic book racks!  McCloud was the creator, writer, penciler, as well as, the inker for this first issue, as well as, the thirty-six issue run before the story was finished and the book cancelled.  The first ten issues were published in color and then Zot! took a short break, before coming back with a small press, small sized issue, number 10 & 1/2, then the book resumed once again, in glorious black and white, beginning with issue number eleven!

Zot! # 1 introduces us to the hero, Zot, who comes from another Earth, from across the dimensional barriers,  On his Earth, it’s actually 1965, though a much more futuristic Earth than our own was in 1965.  But first, the story begins with the introduction of Jenny Weaver, a young teen-aged girl, who has just moved from Los Angeles, the latest in a series of moves that has taken her, and her family, from Ann Arbor, Lexington, Springfield and Los Angeles, and now to this new unamed town.  She is lamenting the loss of her friends when her briother, Butch, turns up to “bug” her!  As she chases him between a couple of houses a “window to another world” appears before her and Zot flies through, followed by a bunch of “killer robots”!

Zot rescues Jenny from the robots and blasts them to bits.  He provides a brief, two page summary, of his background, including his world the neighboring world, and why the robots are chasing him.  As he finishes, one last robot strikes him from behind and Jenny grabs his gun and blasts the final robot!  There is a nice award moment when their hands touch when they both reach for the gun and both show embarrassment.

Police sirens are heard and Zot quickly flies back through the dimensional portal and Jenny runs after him.  Butch follows them both, trying to stop Jenny, waving a golden key which he has found.  Jenny grabs the key, which she thinks is possibely the key from Zot’s story and Butch trips and causes both, himself and Jenny, to tumble into the portal, where they find themselves dangling from a very tall building!  Jenny falls and blacks out!

As it turns out, Peabody, Zot’s robotic butler swoops under her in a flying car and saves her before she can fall to her death.  Peabody, Zot and Butch have carried Jenny to Zot’s home in the county, where she recovers.  Zot offers to show Jenny and Butch around and wants to take them sightseeing.  Peabody thinks they should first return the key, then sightsee.  A compromise is reached and they decide to sightsee on the way to return the key!

During the sightseeing, it become obvious that Zot is a celebrity on his world, as he is sought out by autograph seekers.  They reach the C.P.Z.P., or Colonized Planets of Zone “P”, and break into a meeting of Zot’s Earth leaders and Zarbim, a representative from the Planet, Sirius IV.  Zarbim is behind the renegade robots, as they are searching for the missing key.  Before they can turn over the key, it is mysteriously stolen from Jenny’s pocket!

Suddenly the chamber is invaded by a “radical” weilding a “de-evolution” gun and he uses it on the Earth and Sirius IV’s leaders, turning them into monkeys!  Zot overcomes the radical and uses the gun to reverse the effects.  He then destroys the gun, so it can do no more harm.  It’s at this point that Butch steps out, revealing that he too has been reverted to a monkey, and now there is no gun to reverse the effect!

And that’s where issue number one ends!  In the second issue we meet the villian, Dekko, who proved to be Zot’s major nemesis during the series!  All in all a pretty nice first issue.  It gives the necessary back story and introduces us to the principal characters with a bit of fun action thrown into the mix.  And unexpected turn of events in the Butch de-evoling into a monkey and the stage is set for futher adventures.  I give the book four (4) out of five (5) Legion Flight Rings!  It’s a fun series that can be enjoyed by all ages.  Seek it out, you won’t be sorry if you add it to your collection!