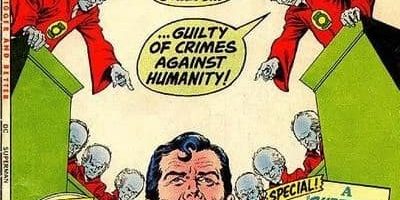 Superman # 247, cover dated January 1972 was published by DC Comics.  This issue features a nice Curt Swan/Murphy Anderson cover of the Guardians of the Universe passing judgement against Superman for “crimes against humanity!”  Turning to the story inside, entitled; “Must There Be A Superman?”, it is written by Elliot Maggin, penciled by Curt Swan and inked by Murphy Anderson.

The story begins with Superman in space, preventing a pod full of spores from bursting in our universe and thus upsetting the “galactic balance of nature”!  Superman succeeds, but is knocked unconscious.  He is rescued by Green Lantern, Katma Tui and taken to Oa, where he undergoes a Power Battery treatment to heal his injuries.

While undergoing the treatment the Guardians plant a subconscious notion that his influence on Earth is interfering with Human progress!  Superman soon returns to Earth and begins to contemplate what they said.   A short time later Superman gets involved in the problems in a migrant camp in California.  He briefly explains his other worldly origins to a young boy and he stops an earthquake and also rebuilds the migrant worker’s homes for them.  Superman goes on to tell them that they must not count on a Superman to patch up their lives every time they face a crisis or disaster.  They don’t need a Superman, what they really need is a “super-will to be guardians of their own destiny”!  Superman promises to stay in touch with the young boy and returns to Metropolis,, only to be called to a ship at sea, needing immediate assistance.

But now the seed of doubt has firmly taken root in Superman’s mind and the watching Guardians say their “task is done and they must let time take it’s course!”  Definitely a new direction for our hero, Superman!

There is a second original story on the private life of Clark Kent, written by Denny O’Neil and drawn by the same art team as the lead story.  Basically it’s a Clark Kent / Jimmy Olson team-up, with the moral of this story being that there are times when even Superman doesn’t need to use violence.

The third, and final, story in this issue is a Superman story reprinted from only six years prior.  It was originally run in Action Comics # 338, from June 1966, and entitled; “Muto — Monarch of Menace!”, written by Edmond Hamilton & pencilled by Curt Swan and inked by George Klein.  So it’s a recent story and to make matters worse, it’s a two-part story continued into the next issue!

I guess the lead story, as well as, the second story were DC’s attempt to make Superman more relaxant to the times, but didn’t really succeed like the Green Lantern / Green Arrow series by O’Neil and Adams that I reviewed earlier.  Therefore I give this comic only two (2) out of five (5) Legion Flight Rings, even with the nice Curt Swan art.