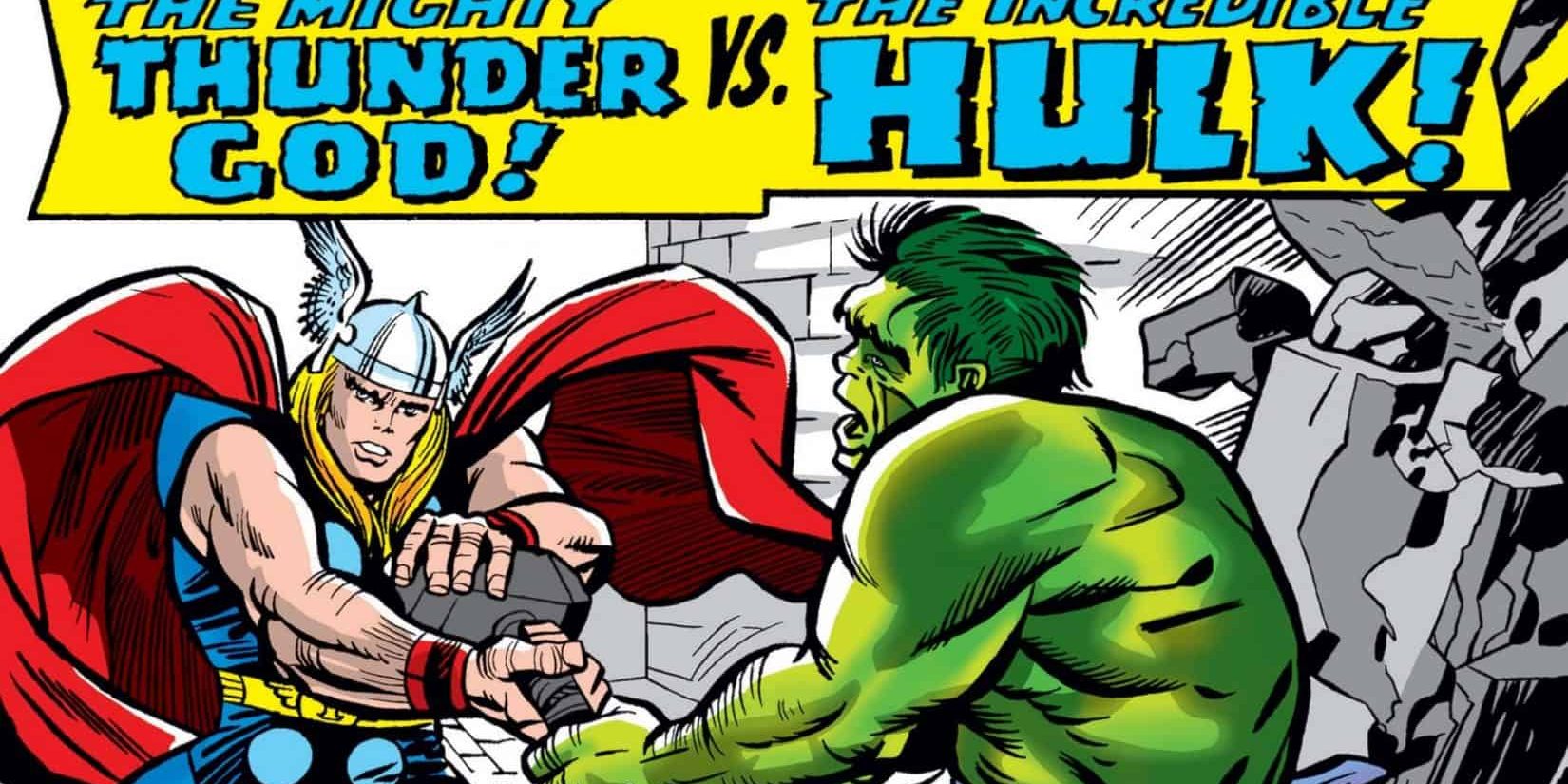 The story itself was entitled, simply, “The Mighty Thor Battles the Incredible Hulk!”, and that said it all.  The story is written by Stan Lee and penciled by Jack Kirby, with inks supplied by Chic Stone!  The tale begins with two gangs of kids wielding Thor & Hulk signs, arguing over who is the strongest, Thor or the Hulk!  Thor happens to be flying overhead and swings down to address the kids.  Kirby draws the God, Thor, sitting on the curbside surrounded by kids on either side of him, who beg him to tell then who is the strongest.  You just don’t get to see a scene like that in today’s comics!  But it’s scenes like this that make these early Marvel Comic books so endearing to readers at the time.

Thor begins by recalling the battle he fought against the Hulk previously, as recounted in Avengers # 3, and shares that with the kids.  They want to know more and Thor reveals further points of his battle with the Hulk, that was not touched upon within the pages of the Avengers comic.  He tells them of how he and the Hulk were separated from the rest of the Avengers and the Sub-Mariner.

Thor decides to ask his father, Odin, to remove the power from his enchanted hammer, so that he can battle the Hulk with his bare hands to determine which of them is the strongest. He does this which inside his twirling hammer, causing a dimensional rift allowing Thor to address his father, while the Hulk is unable to touch Thor within the spinning hammer swing!  Odin grants Thor his wish and removes the enchantment from the hammer for five minutes.

What follows is a great Kirby battle scene with both the Hulk and Thor pulling out all stops in the effort against the other!  At first one, and then the other, gains the upper hand, but before the winner can ultimately be decided, the cave in which they are battling collapses, thus separting the two antagonists!  And it’s at this point in time that Odin’s enchanment returns to the hammer and the Hulk and Sub-Mariner manage to disappear from the field of battle, leaving Thor to wonder exactly who is the stronger of the two!

The kids complain that Thor hasn’t told them who was the stronger, and Thor answers that he “can only guess at the answer … but can offer no proof.”  Therefore, he chooses to remain silent, though he leaves the kids with this final thought; “It is not the one possessing the greatest power who is important! It is one who uses his power wisely … in the cause of Justice!”  And as he flies away, he thinks to himself; “For the lession I have learned is one I shall never forget!  Strength alone is meaningless!  Without virtue … it is an empty shell!”

Leave it to Stan Lee to deliver such a strong moral for children, as well as, young adults on the final page of a sixteen (16) page story, basically just recapping another story form another comic!  Quite the accomplishment!  The rest of the comic is a five (5) page Tales of Asgard tale recounting; “The Coming of Loki!” which reveals the origin of Thor’s half-brother, Loki!

I give this comic a rating of four (4) out of five (5) Legion Flight Rings.  A classic story seemingly tossed into a run where Thor was battling such basic Marvel villains like, Mr. Hyde and Cobra, the Grey Gargoyle, and the Absorbing Man!  A must have for any Silver Age Marvel collection!