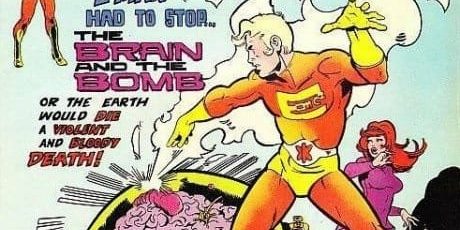 E-Man # 1, from Charlton Comics was cover dated October 1973, so it would have been on the stands during the summer of 1973.  It sports a nice Joe Staton drawn cover, featuring a new hero, dressed in orange and yellow!  The cover declares “First Edition” and “Collectors Item”, so there could be no doubt that this was a new comic featuring a new hero from the struggling company!

The story inside was simply entitled; E-Man Part One The Beginning.  The story is written by Nicola (Nick) Cuti and both pencilled and inked by cover artist, Joe Staton.  And it tells the story of a “packet of energy” that somehow gains sentience.  It knows it is, but not what it is!  For millions of years the “packet of energy” aimlessly wandered through the vast regions of space, where is grows in knowledge of the universe, as well as, itself.

Just when it’s ready to give up it’s search for other life, it encounters a spaceship traveling towards the ninth planet of the Solar System, Sol (i.e. Pluto, then still considered a planet).  It enters the ship and mimics the “lifeform” it encounters, a robot.  Only when it converts from energy to mass, it causes the sensitive ship to veer off course due to the increased weight.  The ship misses Pluto and continues on through our Solar System until it crash lands on Earth!

Somehow, the “energy packet” finds itself trapped in a light bulb attached to the dressing room mirror of exotic dancer, Nova Kane!  It communicates with her and convinces her to free it by breaking the bulb.  It once again converts from energy to mass and assumes, not a female figure, by mimicking Nova, but a male figure.  And no, no explanation was given as to why!  Nova invites him to stay with her and after spending his first night on Earth in the battery of Nova’s Jeep, she invited him in for breakfast.

Once inside he sees a poster of Albert Einstein and the formula E=MC Squared.  He asks what that represents and Nova explains that it is the formula for converting energy to mass and vice versa!  He states that’s him and names himself E-Man!  Nova’s landlord knocks at her door and attacks her.  E-Man comes to her rescue and then deduces that the landlord was somehow affected by the space ship that crashed in upper New York.

Taking a page from DC Comic’s The Atom, E-Man travels through the phone wires to up-state New York.  Nova follws in her Jeep!  Once she arrives, she is again attacked, this time, by all the residents of the small town where they have traveled to.  E-Man appears in a new costume, with the formula, E=MC squared written across his chest!

They track down the crash site and enter the ship where they are once gain attacked, this time by the robots on the ship.  They fight to the “giant brain” that is in control of the robots and manage to destroy the brain, thus rendering the robots and the bomb they were attempting to set off, harmless!  All this action takes place in sixteen (16) pages, with the ending seeming to be very rushed to fit it in in the allotted page count.

The rest of the book is taken up by a eight (8) page Bishop, back-up story written by Nick Cuti and drawn by Tom Sutton.  It’s an interesting premise, but rather forgettable, all in all.  The lead E-Man story showed promise, though it was not the most well-written story, but the art by Staton was actually pretty fun, therefore I give this comic a rating of three (3) out of five (5) Legion Flight Rings!  The series only lasted ten issues from Charlton, but has resurfaced over the years form other publishers, including First Comics and Comico!