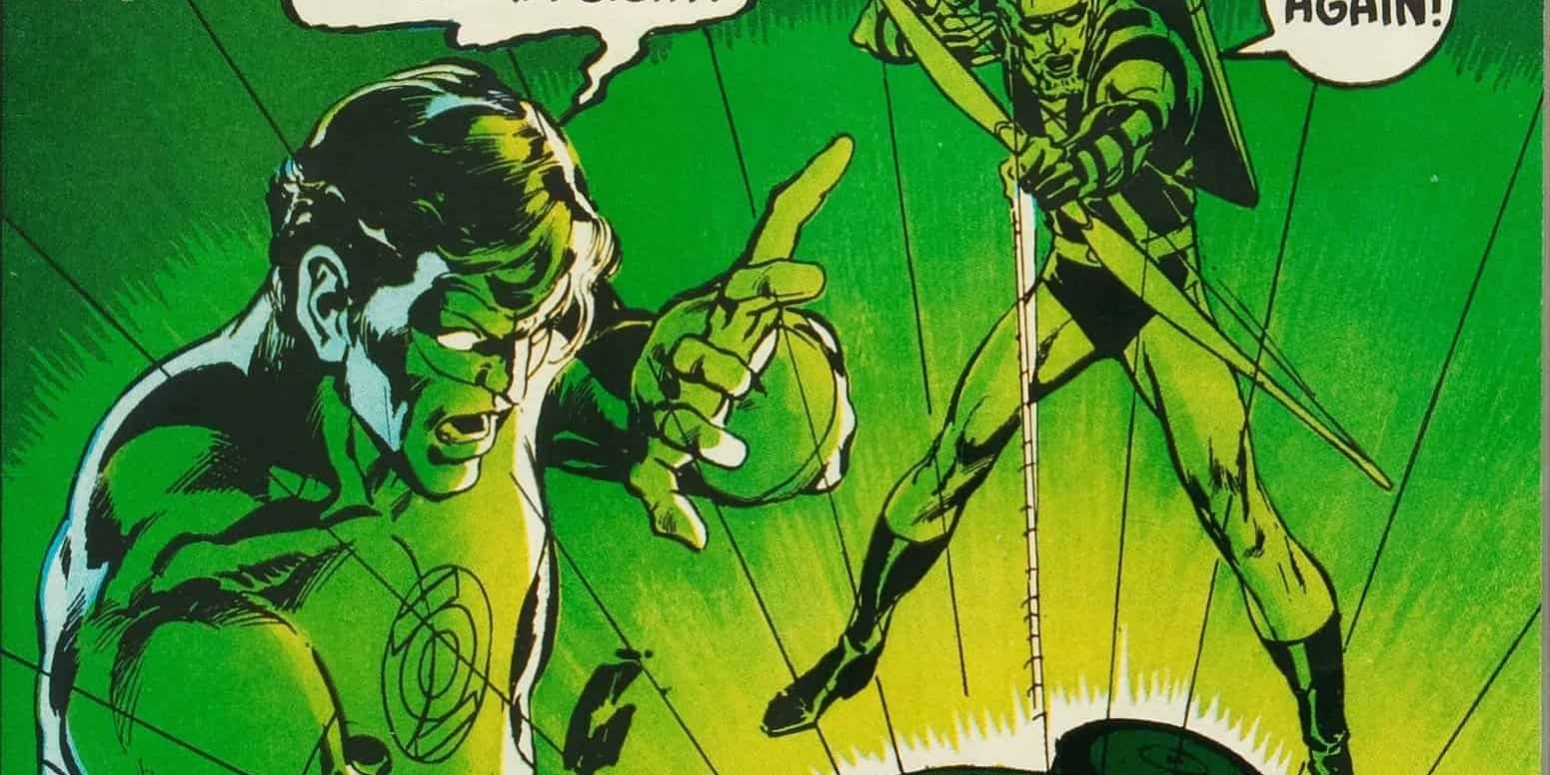 Green Lantern # 76 from DC Comics was cover dated April 1970.  The title per the indicia was just that, Green Lantern, but the cover declared the book to be Green Lantern Co-Starring Green Arrow, and with that title change, there was also a change in the writer and artist, as well as, a major change in direction.

Out were long time writer and artist, John Broome and Gil Kane!  Both men had produced excellent work over the years on Green Lantern, but the book was losing readers and was about to be cancelled, unless something was to be done!  So editor, Julius Schwartz took the necessary steps to see if he could reverse the trend, and once again build up the readership by bringing in writer Dennis O’Neil and artist Neal Adams, and by adding a second-tier hero to act as a foil to the main hero of the book!

The cover was a beatifully drawn masterpiece by Neal Adams, showing Green Arrow shattering Green Lantern’s power battery while GL is reciting his oath.  Quite an eye-grabber that is every bit as powerful an image today, as it was back in 1970!  O’Neal’s story was entitled; “No Evil Shall Escape My Sight”, an actual line from GL’s oath.  Both the pencil and ink work was provided by Neal Adams, who provided a “make-over” for GA this issue, as well.

In the story, Green Arrow helps to show Green Lantern the modern-day problems in America.  He does this by showing GL the plight of the people, living in the tenements of slumlord Jubal Slade.  There is a very nice couple of panels on page six, where an old black man confronts GL and says; “I been reading about you, how you work for the blue skins and how on a planet someplace you helped out the orange skins … and you done considerable for the purple skins!  Only there’s skins you never bothered with … the black skins! I want to know … how come?”  Wow, talk about social relavancy!  Right in our faces, as well as GLs!  Quite a change form the previous seventy-five (75) issues of the comic!

Later when the Guardians of the Universe, observe GL roughing up Slade, they summon him to Oa, where he is reprimanded.  Acting in a typical Hal Jordan manner, against the Guardians’ orders, GL returns to Earth and helps the district attorney collect enough evidence to put Slade away.

Angry at his insubordination, the Guardians contact Green Lantern, but Green Arrow argues that there are serious problems across America that have previously escaped the attention of Green Lanterns.  This takes place during the epilogue to the main story and Neal Adams draws a wonderful panel with GA in the forefront and the heads of Martin Luther King Jr. and Bobby Kennedy in the background!  The Guardians confer, and decide to send a representative to accompany GL and GA, as they go on a journey of discovery across America.

This Guardian is generally refered to as, “The Old Timer”, but is given a name in a later story and that name is Appa Ali Apsa, not that it’s really important or is relevant in any way shape of form other than to show I do my research before writing this reviews!

I rate this comic a full five (5) Legion Flight Rings out of five (5).  DC took a chance and allowed O’Neal to bring DC Comics up to Marvel Comics standards and the art by Neal Adams is just “picture perfect”!  Unfortunately, their run only lasted fourteen (14) issues and came to an end with issue # 89.  I guess it was simply to late to save the comic.  Critics loved the book, but not enough readers bought it, so Green Lantern Co-Starring Green Arrow was cancelled until a few years later, when it was brought back once again!