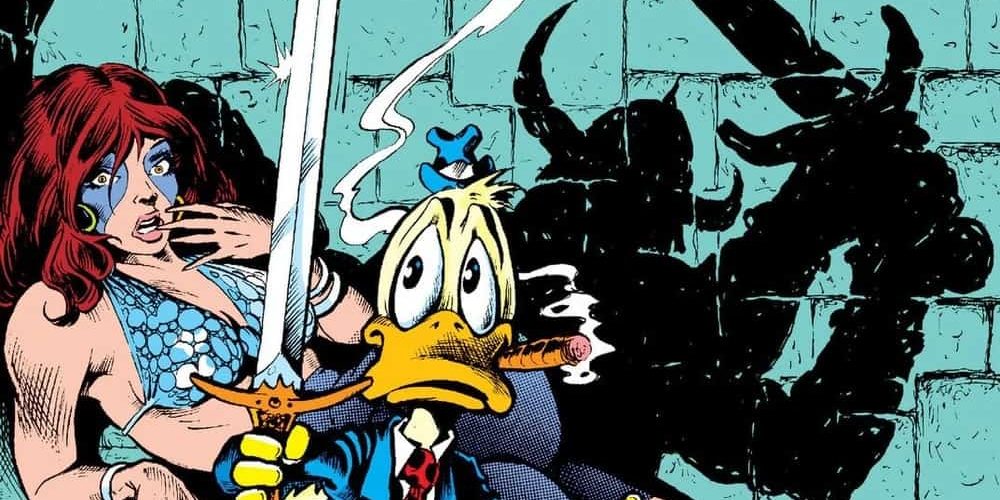 Cover dated January 1976, Marvel Comics gave the world a new hero, well he had actually appeared a couple of times previously, but now in his own comic book; it was Howard The Duck # 1.  The story began: “Twice he has saved the City of Cleveland — First from the warty menace of the Man-Frog, then from the fangs of the Horrible Hellcow!”  “And what thanks did he get?  Jail the first time, benign neglect the second.”  So begins the saga of a depressed duck in the story entitled; “Howard The Barbarian”, created and written by Steve Gerber and illustrated (pencils & inks, as well as, colors) by Frank Brunner.

The book opens with our duck contemplating suicide!  All this on the opening splash page, no less!  He decides to throw himself from a tall tower he sees in the distance.  So Howard makes his way across the poluted Cayahoga River to the tower.  He can find no door to enter the tower, so he sets off to climb the thing, only to discover that it is made out of plastic, old credit cards to be exact.  There’s even one of Stan Lee’s old Mastercards on the tower.

He eventually finds a window and enters the tower, where he encounters Beverly Switzler, who is in chains, a prisoner in the tower!  Howard is attacked but manages to defeat a barbarian/werewolf (hey buy the comic and see Gerber’s explanation, if you don’t believe me!).  He is then set upon by the main villain of the piece; Pro-Rata, the mad financial wizard, I kid you not!  He has Beverly dress Howard in barbarian duds (she’s already decked out in a ‘Red Sonja’ chain-mail outfit, herself.

He explains that he is sending them on a quest to find and bring back a jeweled key, which is needed to power the Cosmic Calculator, which will make Pro-Rata the Chief Accountant of the Universe and allow him to collect the Cosmic Dividend!  Wow, is that cool or what?  Trust me, it’s totally silly, but still totally cool, as well!

The wizard sends Howard and Beverly into another dimension to recover the key, they manage to succeed in securing the jeweled key with the careful use of Howard’s last cigar and they flee from two stone statues who come to life, as well as, a dragon-like Bahndbird, which pursues them.  The wizard manages to recall them back to our dimension, but the Bahndbird is drawn through the portal, as well.

Spider-Man, who guest-stars in this first issue, arrives on the scene and manages to save Howard from falling to certain death, as the wizard dies in the burning Cayahoga River, which manges to get set on fire, during their battle with Pro-Rata.  Spider-Man swings off to track down the Bahndbird, leaving Howard and Beverly alone at the top of the tower, where Howard wishes for a good cigar!  Thus ends the first issue of this new series!  The series lasted thirty-one (31) issues before being cancelled.

I give it four (4) Flight Rings out of five (5) possible Flight Rings.  The story is fun and the art is terrific.  It was a very popular book when it came out in the fall of 1975.  In fact, many dealers were selling it for more than cover price and in some parts of the country in got a very limited release, thus causing it to be rather scarce, and therefore, causing many fans/collectors to have to pay inflated prices at conventions or via mail order.  I was lucky enough to grab it from the rack at my local comic retailer at the time.