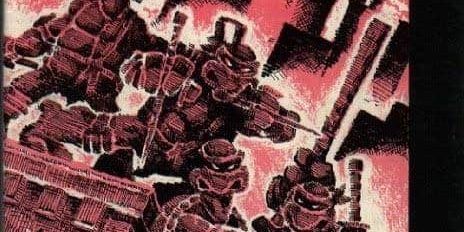 The year was 1984, but don’t ask me exactly which month. I vaguely remember the late summer or early fall, but I could be wrong.  I don’t remember, and the comic does not list any month on the cover, just the year 1984 and the fact that it was put out by Mirage Studies in the indicia on the front inside cover.

But back to my story, I entered the comic book store like any other week, but there was this new, slightly larger comic book looking back at me.  I seem to remember it lying on the bottom of the comic rack, a small stack but not very many.  It was black around the edges and had a mostly red illustration of what looked to be turtles, holding weapons!  The comic was Teenage Mutant Ninja Turtles # 1.  Well, to be truthful, nowhere does it say it’s issue # 1.

I picked it up, flipped through it, saw that it was dedicated to Jack Kirby & Frank Miller and I also saw that it was printed in black and white, that’s correct, no color, only the color red was used on the cover!  I decided I liked what I saw, and added it to my purchases that week.

Once I got it home and read it, I was enthralled by the story and art produced by Kevin Eastman and Peter Laird, who both had a hand in writing and drawing this comic.  I had never heard of these guys, but they told a fun story with very serviceable artwork.  I could see their influences, certainly Jack and Frank, who they dedicated the book to, but also it had an underground look and feel to the story which I liked a lot.

The story itself introduces the reader to four mutated turtles and their father figure, Splinter, a rat.  It story of the turtles, Leonardo, Michaelangelo, Donatello and Rafael origins are told by Splinter, who also shares his own origin story, as well.  They gain their size and intellegence from the same accident that gave Marvel Comic’s hero, Daredevil his powers.  An old blind man is crossing the street and is about to be run down by a truck.  A young man lunges and pushes the blind man out of the way, only to have a radioactive canister fall from the truck striking the young man near his eyes and then bounces away to break open and the contents fall into an open sewer and exposes the four young turtles and a rat.  I wonder how Kevin and Peter got away with that?

The rat, Splinter, teaches them martial arts, that he, himself, had learned from his human master, before his master was murdered.  The rat trains the turtles until he feels they are good enough to take on the murderer, Shredder!  The turtles take on Shredder’s men, overcoming them easily, but they fail individually when fighting against Shredder.  But what they could not accomplish alone, together they succeed, and Shredder seemingly falls to his death!  Thus ends the first Teenage Mutant Ninja Turtle comic and adventure.