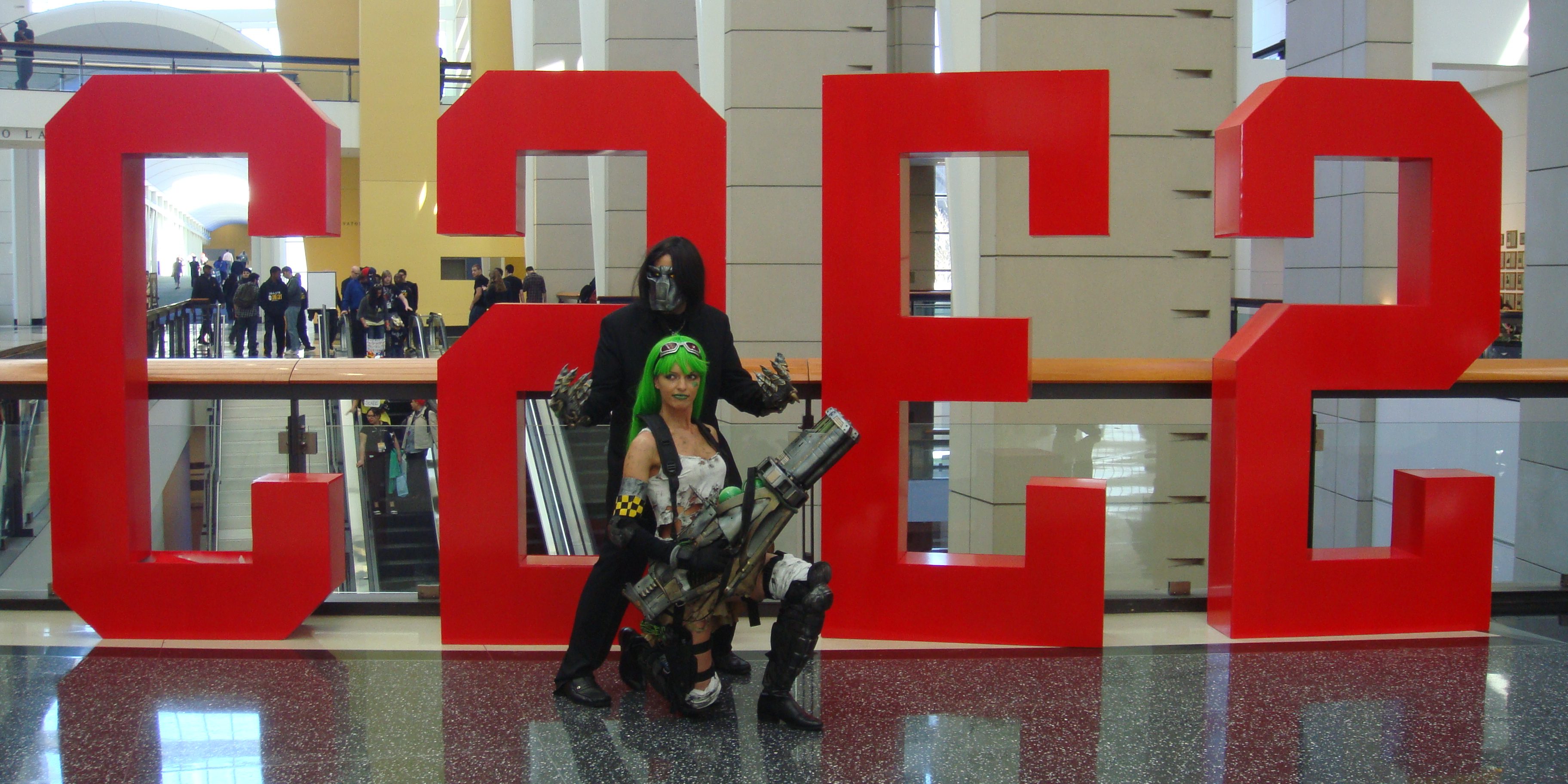 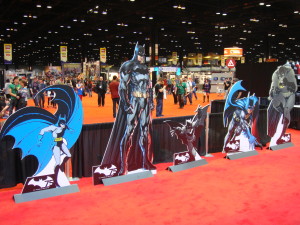 The fifth annual Chicago Entertainment & Comic Expo (C2E2) opened Friday, April 25 at Chicago’s McCormick Place, occupying the convention center’s south building for the first time after setting up shop in the venue’s other three buildings over the course of the past four years. The large amount of real estate at the entrance to the show made for a welcoming, spacious entry as attendees dispersed in various directions to seek out the many retailers, publishers, and celebrity autographs available to them. One unique aspect of this year’s show was the open view between the concourse and show floor; fans passing through the south building could take a look at the show from the outside, between the various Batman standees commemorating the character’s 75th anniversary, and once inside there was an unusual open, airy feel that was a refreshing change of pace from the often-claustrophobic feel at other cons. Wider aisle between retailers and publishers gave way to narrower ones closer to the back, but on the show’s opening day, traffic flowed pretty smoothly with only minimal pedestrian logjams. 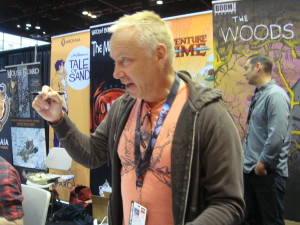 Smaller independent publishers like Creature Entertainment were given prime space at the very front of the floor near the main entrance, in keeping with C2E2’s tradition of giving such publishers the opportunity for increased traffic and exposure. Larger ones like Valiant Entertainment and BOOM! Studios also had prominently placed booths, and Marvel Comics expectedly had the largest footprint of all publishers, with plenty of space to manage creator appearances and signings. Writer Paul Jenkins was stationed at BOOM! Studios’ booth and eagerly engaged fans who were discussing his projects. Jenkins discussed his recently-concluded Deathmatch series and stated that’s he’s looking to pitch a follow-up series to the publisher, with the hopes of again bringing onboard artist Carlos Magno, who illustrated the previous series. While not wishing any details to be revealed, Jenkins stated that he hoped the series could begin sometime this year.

“Many so-called heroes aren’t heroic at all,” Jenkins stated. “Wolverine kills people all the time and he’s called a hero, but the real heroes are those who stormed Omaha Beach. I want to do a story that features real heroes, not psychopaths.” Jenkins then explained that he wanted to feature these kinds of characters in the sequel to Deathmatch.

The show also continued a tradition that it’s become known for, namely a larger ratio of comic retailers to others carrying other pop-culture goods. Plenty of retailers had toys, tee shirts, and even weapons for sale, from foam mockups to actual swords and knives. Near the back of the hall, other retailers sold other niche goods such as steampunk apparel and jewelry. The large Artists’ Alley area was nestled near the back of the hall, but creators like artist Greg Horn and writer Scott Snyder drew healthy crowds throughout the day at their locations. 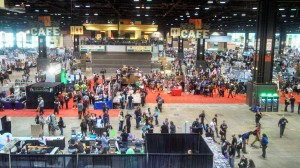 As usual, there were plenty of panels, one of the larger ones being DC Comics’ All-Access panel, moderated by DC spokesman John Cunningham and creators such as Snyder, Brian Azzarello, and Dan Jurgens. Cunningham began the panel by giving Snyder to chance to discuss his titles, among them the just-launched weekly series Batman Eternal, which Snyder co-writes. “Gotham is a living, breathing place,” Snyder stated in reference to the title. “(Batman Eternal) will change the continuity of Gotham.” The discussion moved onto his Zero Year arc in Batman, which has just entered its final phase. “I literally finished writing the story on the plane to Chicago,” Snyder informed fans. “This is a series I’m incredibly proud of.” Snyder also thanked the fans for their support of the additions to Batman’s origin that have been revealed in the storyline.

Azzarello discussed his part in DC’s second upcoming weekly series, Future’s End. “It’s going to be incredibly dark,” Azzarello revealed. “I wish I could be you guys,” in reference to his anticipation for how he expects the series to surprise readers. He also discussed his current stint on Wonder Woman, which he says will be wrapping up in five or six issues. “I’ve really loved working on this book,” Azzarello said. “I’m going to miss her.” 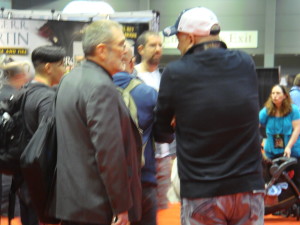 Snyder also mentioned the con itself, and that this very show is actually the first he has appeared at as a creator. After the panel, Snyder also referenced the very first C2E2 four years ago, which was the show he was given the opportunity to pitch ideas for Detective Comics to Geoff Johns and Dan DiDio, which led to his tenure on that title before taking over Batman at the onset of DC’s New 52 relaunch. While DC is not set up as an exhibitor as this show, DiDio and marketing VP Bob Wayne were nonetheless spotted roaming the floor.

The show continues through Sunday. More updates to come. 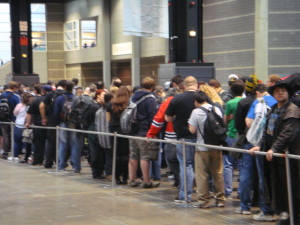 As is typical with C2E2, and with every convention of its kind, Saturday saw the show’s largest crowds. The spacious aisles and entry area filled with human traffic throughout the day, with hundreds waiting to enter the show on Saturday morning. Things didn’t really let up throughout the day, though, as they often do; late Saturday afternoon still saw large crowds slowly snaking through the aisles and jammed into the concession areas. While it’s difficult to quantify, there seemed to be more cosplayers in attendance than ever before, with many of them later competing in the con’s official costume contest held Saturday evening. To the chagrin of many other attendees, fans in costume frequently, albeit inadvertently, created traffic jams stopping to pose for photos in highly traveled areas. And if there’s any one character that seems to be this year’s trend, it’s DC Comics’ reimagined New 52 version of Harley Quinn.

As is also typical, Saturday’s schedule housed some of the con’s most anticipated and highly attended panels. DC’s New 52 panel featured a broad look at the upcoming storylines in most of the New 52 titles, as well as the upcoming second weekly series, Future’s End. Panelists included Jimmy Palmiotti, editor Bobbi Chase, and moderator John Cunningham, and Palmiotti discussed an upcoming July one-shot titled Harley Quinn Invades San Diego Comic Con, the title of which Palmiotti stated was exactly what happens in the book. “Harley decides to go to Comic Con, and isn’t really sure how to react to all the fans in costumes, many of whom are dressed as Batman,” Palmiotti stated. “(She) ends up going out on the town with a bunch of Harley cosplayers, who don’t realize she’s not a cosplayer herself.” Palmiotti added that the issue would also feature several “celebrities” who won’t be known to anyone outside of the comic circle.

Chase revealed that DC will once again have a September event, again with 3D variant covers, with the theme this year called Heroes, according to Cunningham, in what’s intended to be perhaps an antonymic follow-up to last year’s Villains Month. Chase added that some happenings leading to this event will take place in this year’s Free Comic Book Day offerings from the publisher.

DC also hosted a packed room for their Batman panel that afternoon. Panelists included several creators currently working on the various Batman titles, including Batman writer Scott Snyder and Batman Eternal co-writer James Tynion IV. One of the titles discussed was the upcoming Grayson series, which indicates that Dick Grayson will make it out of Forever Evil relatively intact. Snyder stated that he pitched a tagline for the series as, “You might think you know Nightwing, but you don’t know Dick.” This elicited laughs from the crowd, and a sarcastic response from Cunningham: “Scott, let’s talk.” Snyder went on to talk about the current Zero Year story in Batman, stating it was “very personal. I took dark moments and used those for inspiration, and how the world looks like a funhouse of mirrors when you’re depressed.

Much of the focus was on the weekly Batman Eternal, where Snyder stated, “We wanted to do a weekly to show what it’s like to live in Gotham, at a level that you can’t do in a monthly. You have fifty two issues to change Gotham; you can be Godzilla and destroy everything.” Snyder paused and then added, “but in a loving way.” 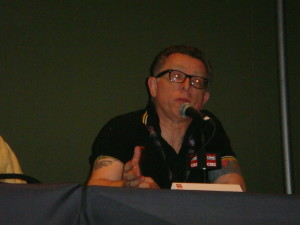 Marvel also had its share of panels, the highest profile being their Original Sin panel to promote their latest upcoming event that included a surprising number of spoilers. So, SPOILER ALERT and all that. The panelists included writers James Robinson and Mark Waid, and the revelations revealed mainly center around skeletons in the closets of many major Marvel characters. According to Robinson, these include Tony Stark’s involvement in gamma bomb incident that transformed Bruce Banner into the Incredible Hulk, and Johnny Storm’s interference causing the destruction of a serum developed by Reed Richards that would have cured Ben Grimm of his transformation into The Thing. The biggest reveal of all was the development that Odin actually has a daughter in addition to his sons Thor and Loki, who is none other than Angela, the angelic character created by Neil Gaiman and Todd McFarlane in the pages of Spawn some two decades ago. OK, end SPOILER ALERT. 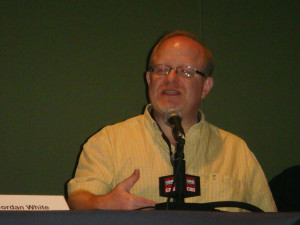 Waid and Robinson also discussed the secrets revealed regarding Matt Murdock, and even The Invaders going back to World War II. Waid stated that his story in the recent Daredevil #1.50 drops some clues about Murdock’s revelation that will lead into that character’s Original Sin tie-in. A comedic moment occurred when fans lined up to ask questions, and one stated that he was thrilled to see that Marvel seemed to be treating its creators well, to which Mark Waid loudly piped in and shouted, “No kidding!” 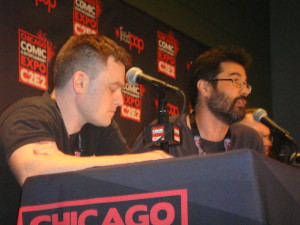 The crowd took its time filing in for the shows final day, but by mid-afternoon were quite strong, especially for a Sunday. Those looking for deals could certainly find them; Sunday saw the usual array of deep discounts by retailers; one comics retailer had reduced all of his hardcovers down to ten dollars; surprisingly, even sealed copies of several variant Marvel Masterworks editions were available for this price. Other exhibitors had reduced their prices to shockingly low values; one such vendor selling quality metal replicas of swords and knives was looking to sell off as much of his stock as possible with such replicas going for a mere $20. Many comics were marked down to half off and others had been lowered to one dollar.

One logistical problem from past years continued to plague this year’s show, namely the shuttle service from certain locations. Shuttles often took over thirty minutes to arrive, and when they did, were too full to accommodate all attendees waiting to board. Some stops were reportedly skipped entirely. Many fans resorted to taxi services to get to and from the convention, and these often served as a much more efficient mode of transportation. The problem seemed to be twofold; a simple shortage of shuttle buses for the large number of attendees, and drivers who were unclear as to where the exact drop-off locations were. The problem was compounded by unusually cold and windy conditions at the waiting areas, even by Chicago standards in late April.

The shuttle issues were the worst of the problems observed for the fifth C2E2 convention. Overall, the show was well-run and organized; crowd control was superbly handled, and volunteers for the most part were able to knowledgably answer attendees’ questions. Concessions, while pricey, were more varied than at some past shows and much more palatable. And the venue itself provided a bright and airy atmosphere that enabled weary fans to step away from the show and enjoy some peaceful respite.