Once again the week rolls around to the weekend and it’s time for another RETRO REVIEW!  This week I’ve gone back to 1971 and Captain America and the Falcon # 143 from Marvel Comics!  The issue is cover dated; November 1971, and technically the book is actually Captain America # 143, per the indicia, but the cover clearly lists it as Captain America AND the Falcon!

It’s got a really nice John Romita (Senior) cover and he even signs it, so he must have liked it, as well.  Hey, that’s my story and I’m sticking to it!  😉  Take a look: 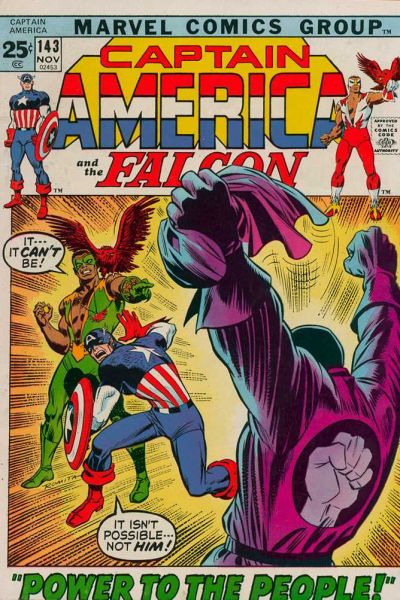 As you can see, Romita signed it right below Captain America’s shield!

This comic had previously sold for 15 cents, and with this issue, it jumped in price to 25 cents, but it also increased in page count.  In fact, this story is a whopping thirty-four (34) pages long.  It was just like getting an annual.  And with the very next issue, Marvel reduced the price back down to 20 cents.  I think the price hijinks had something to do with fooling DC Comics into raises their prices, and with Marvel dropping their’s right back down, they had the cheapest comics on the stands!  And from what I remember, it worked!

This comic is entitled; “Power To The People” and the title is credited to John Lennon.  The writer of the comic is Gary Friedrich and the art, both pencils and inks, are by cover artist, John Romita (senior).  The story begins right where the previous three issue left off, with the villain, the Grey Gargoyle, having been defeated and launched into space.

Captain America, the Falcon, Agent 13 (Sharon Carter) and Nick Fury returning to New York City, by way of a secret entrance in New Jersey.  They eventually pop up into the New York barber shop that’s a S.H.I.E.L.D. front.  Cap returns to his secret identity, Steve Rogers, a New York policeman, and reports for duty, where the police commissioner assigns him to assist Rev. Garcia. who runs a Boy’s CLub in Harlem.  The Falcon also switches to his secret identity, as Sam Wilson, Social Worker in Harlem.

Sam is soon approached by Leila, a black militant from Harlem, and also someone that is attracted to Sam, as he is to her!  She drags him to a meeting of the People’s Militia, where they witness men in hooded masks rallying the people of Harlem to riot!  Starting with Rev. Garcia’s Boy’s Club!  Sam tries to present the opposite point of view, but is beat up for his troubles.

Only through the help of Liela is Sam saved from being beaten to death.  She argues that he can be used to talk to the whites, that they’ll listen to him, even when they won’t listen to the People’s Militia!  The masked leader agrees, and Sam is dumped in front of his apartment, just as Steve and Sharon walk by on the way to a date!  Sam manages to tell Steve of the danger to Rev. Garcia before passing out.

Chapter two begins with  Steve, in his Captain America identity, crashing in on the attack on the Boy’s Club and joining in battle!  The scene shifts back to Sam’s apartment, where Sharon has stayed to look after Sam.  Leila arrives and sends Sharon on her way, saying sharon should go and take care of her own and that’s she’ll stay and take care of her own!

Sam awakens, and has strong words with Leila, causing her to storm out.  He switches to his Falcon costume and races to the Boy’s Club.  Now with two super-heroes and Rev. Garcia, the tide is finally turned!  The Falcon convinces the People’s Militia to give them an hour to try to resolve the issues, and if they can’t he would voluntarily join up with them!

Cap America and the Falcon swing back into action, bringing the fight to the People’s Militia’s headquarters, where the masked and hooded men hold congress!  During their fight, the masks and hoods are torn from the bad guys, revealing them to be white and not black as the People’s Militia were led to believe!

Chapter three begins with the revelation that the hooded leader is none other than … The Red Skull!  He leads the heroes, as well as, Leila and Rafe, an outspoken black man into a trap.  Cap is able to use his shield to get Rafe and Leila out of the trap and then turn to battle the Red Skull once and for all.

The Red Skull actually gets the better of them and escapes with his life, but Cap and the Falcon also manage to escape the trap alive, as well.  The story ends with the Falcon turning to Cap and unleashing his frustrations.  He leaves saying he’ll get in touch when he knows where he stands and Cap is left to wonder if he’s lost yet another partner!

That wraps up another RETRO REVIEW, please check back next Friday for a new Fabulous Find!  Be seeing you …