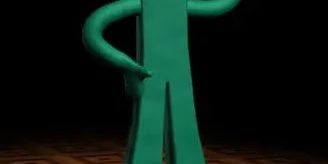 It’s another sad day, because Art Clokey, animator and creator or Gumby has passed away at the age of 88.

Art created the pop-cultural character, Gumby, the asparagus green and made of clay figure, a half-century ago, in 1955.  He had previously created a cartoon short, actually a jazz video, in clay, called Gumbasia.  This was seen by Art Engel, of 20th Century Fox, who approached Art do do a clay series.  And as they say, the rest is history!

Gumby made his first appearance on “The Howdy Doody Show” in 1956 and then received the go ahead for his own series in 1957, shown on NBC.  This show featured Pinky Lee and Scotty McKee, real/live actors.  It was on this series that Pokey, his faithful companion first appeared and the two embarked on a string of gentle adventures.  “The Gumby Show” had an undercurrent of tender, if slightly surreal, spirituality.  This series was one of the first extended uses of stop-time animation on television!

Though the 1950s show was fairly short-lived, Gumby reappeared in a new series in the 1960s and also in the 1980s and continued for years in syndication.  Gumby also starred in a feature film, “Gumby: The Movie” in 1995, directed by his creator, Art Clokey.

Gumby is now firmly ensconced in popular culture and millions of Gumby dolls/fugures have been submitted to their owners’ manipulations!  He also has appeared in comics and vidoe games.  I love the Gumby comics that Art Adams did back in the 90s and am proud to have them in my comics collection.

Art Clokey was born Arthur Charles Farrington in Detroit, MI (bet you didn’t know that!) in 1921.  His parents divorced when he was eight and he lived with his father for a year until his father was killed in an auto accident.  He then went to live with his mother and her new husband.  Who chose to banish the boiy to a children’s home.  At 11, he was adopted by Joseph Waddell Clokey and Art took his last name.

Some of Art’s favorite episodes were: Gumby Crosses the Deleware, Pokey’s Price, Pilgrims on the Rocks and Son of Liberty.  Actor Dallas McKennon voiced Gumby in thses and other episodes.

So once again we lose another creator of our childhood memories.  But luckily we still have that lovable bendable Gumby to remember him by!