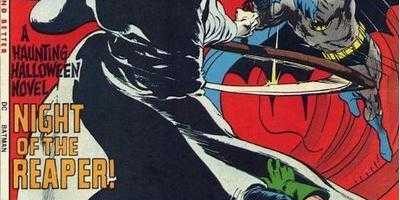 Cover dated December 1971, Batman with Robin the Teen Wonder, appeared on the stands a few months before that date and likely just before Halloween.  Which would have been perfectly timed, as this issue is a Halloween themed issue.  It was written by Denny O’Neil from an idea originally by Berni Wrightson and added to by Harlan Ellison.  The cover and interior art was provided by the great Neal Adams, one of my top three all time favorite comic book artists.

The story is entitled; Night of the Reaper and opens in Rutland, Vermont.  The splash page shows a dark house in the background, a full moon, and Batman staked to a old gnarled tree in the foreground, with cape billowing around his body.  A flip of the page changes the scene to the annual Rutland, Vermont Halloween parade which features people dressed as Super-Heroes.  On these next two pages we see people riding floats dressed as Batman, Batgirl, Man-Bat, Captain America, Havok, Hawkman, Captain Marvel, Superman and Aquaman (and that’s just on pages two and three).  Later will see Spider-Man and Thor make their appearance in a DC comic, as well.  Plus writer and comic book fan Tom Fagan who is hosting a party for all the super-hero costumed merry-makers!  Also writers O’Neal, Len Wein, and artist Berni Wrightson make cameo appearances at the party.

But back to the story, Robin, as Dick Grayson, and a couple of his college buddies, foil a mugging of someone dressed as Robin, then Robin, now in costume fines the body of someone dressed as Batman and then meets, and barely survies, a run-in with the Grim Reaper.  The real Batman finds him and brings him to Tom Fagan’s house to be treated by a Doctor Gruener, a Jewish concentration camp survivor who is searching for a former Nazi, known as The Butcher.

The Butcher only appears in one panel and is blown to kingdom come with a car bomb before Batman can save him and bring him to trial.  Batman then deduces the identity of The Reaper and goes to capture him.  I won’t reveal his identity, but it really isn’t hard to figure this one out and in a twist of fate The Reaper meets his end too.

On the whole it’s a very cool Halloween story by Denny O’Neil with great Neal Adams art, inked by Dick Giordano.  But it’s also based on the real life Rutland, Vermont Halloween parade that Tom Fagan helped start up in the early sixties and O’Neil, Wein and Wrightson actually attended in 1970.

As early as 1965, the local newspaper reported that the Joker, Plastic Man and Dr. Strange were roaming the streets of Rutland, along with Batman (presumably Fagan, but like Bruce Wayne, the Caped Crusader wouldn’t divulge his identity).  Each year thereafter, more and more comic book heroes appeared, as well as, comic book creators, besides the three I menationed earlier, Steve Englehart, Gerry Conway, Marv Wolfman, Roy Thomas, Alan Weiss, Dave Cockrum and Wendy and Richard Pini have been known to attend.

In the 70’s the Rutland Parade achieved a degree of fame when it was used as the setting of this comic book and then others over the next few years.  Besides Batman # 247 (the first time the parade made it into comics, as far as I can document) it was featured in DC Super-Stars # 18, Justice League of America # 103, Freedom Fighters # 6, Amazing Adventures # 16, Avengers # 83 and # 119, Marvel Feature # 2, The Mighty Thor # 103 and Doctor Spektor # 18. Tom Fagan was often depicted as an acquaintance of the title characters of the various comics.

Due to the masquerade, these issues often saw people dressed as Marvel Comics heroes appearing in DC Comics, and vice versa, making these books some of the first unofficial intercompany crossovers in comics!  Though in the Marvel books, Tom Fagan was often dressed as Nighthawk, rather than shown in Batman costume!  A cop-out on Marvel’s part, in my opinion.

Over the Christmas – New Years Holidays in 1972 – 73, Steve Englehart, Gerry Conway and Len Wein crafted a loose three part story spanning titles from both companies.  This story began in Amazing Adventures # 16, continued in Justice League of America # 103 and finished up in Thor # 207, but that’s another story for a future blog, if you want to know more about the Rutland parade in comics.

So let me wrap this up by saying I give this issue of Batman, five out of five, possible stars!  If you don’t already own this comic, do yourself a favor and add it to your collection!