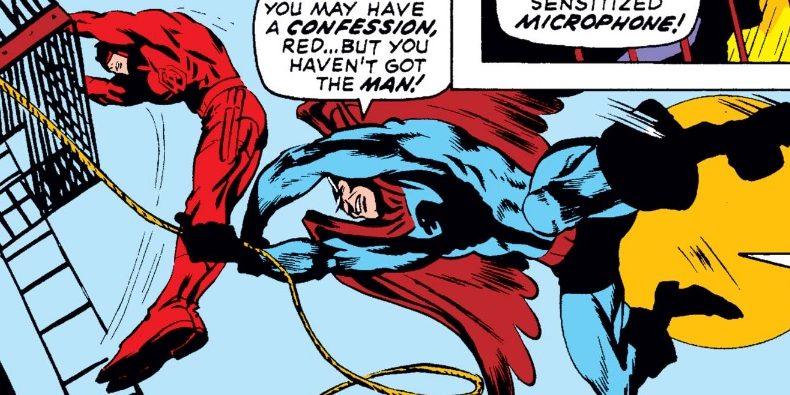 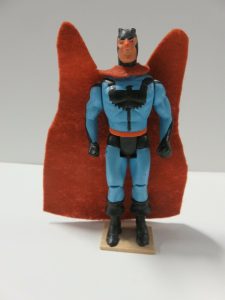 Welcome back to My Hero, our weekly dip into the collection of the same name! A lone superfan spent years repainting, rescultping, sewing capes, and generally altering dozens of action figures to capture the likenesses of the most obscure characters in all of comicdom. We were so taken with his life’s work that we bought the entire collection, and it is now our honor to present it to you! This week, we’re continuing a four-part series in honor of Marvel’s recent Heroes Reborn event and looking at the most famous member of the Squadron Sinister – Nighthawk!

We covered the Squadron Sinister’s collective origins last week, so we won’t get into all that again except to say that Nighthawk was created in Avengers #69 as an analogue to Batman. Instead, we’ll jump to his next major appearance Daredevil #62. This ish revealed Nighthawk’s specific origin story: Kyle Richmond, bored playboy and amateur chemist, was manipulated by the Grandmaster into creating a serum that granted him enhanced physical abilities under the light of the moon.  Motivated mainly by a thirst for power and acclaim, he’s trying to ruin Daredevil’s reputation using a device that discreetly overwhelms The Man Without Fear’s enhanced senses. This lets Richmond snake heroic deeds out from under DD, but since he doesn’t really care about fighting crime he doesn’t bother to follow through on capturing the crooks. Daredevil exposes him for a fraud and destroys his “disorienter” device,with the escaping Nighthawk swearing vengeance on the him. 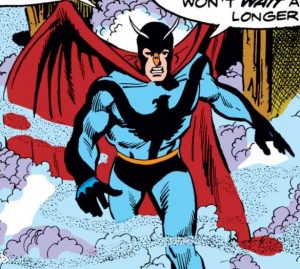 He doesn’t follow through on that either, but this time it is for heroic reasons. Defenders #13 featured the Squadron Sinister being recruited by Nebulon, an alien who intends to buy the Earth and turn it into his species new home, to help him evict Earth’s current tenants. Being the most down-to-Earth member of the Squadron, Nighthawk isn’t wild about that plan and seeks out the Defenders to help him defeat his former teammates. They succeed, but Richmond is mortally wounded in the battle. His allies in The Defenders mystically contribute pieces of their own life energy to revive him, and  offer him Nighthawk a spot on the loosely-affiliated team.

From there, Nighthawk was THE mainstay of the Defenders for years afterward. In fact, he was the major in-story force trying to whip them into shape as a more stable team: he provided them with a traditional headquarters (the refurbished Richmond Riding Academy) and tried to get commitments to a steady line-up (which never really worked). He would be a leading member of the non-team until #106 in 1982, when he apparently sacrificed his life once again to save the world from World War III. He returned from the dead in a self-titled 1998 mini-series and has been popping up in Squadron Sinister and Defenders stories ever since.

My first major exposure to Nighthawk would have been in the pages of Civil War follow-up The Last Defenders in 2008. That series featured Kyle Richmond, federally registered superhero, attempting to revive the team under the auspices of Iron Man’s Initiative. It ended with Richmond losing the Nighthawk ID to a successor under circumstances weirdly paralleled in 2021’s “Next Batman” at DC but running an officially unofficial version of the team. His status as a Defenders mainstay has landed Nighthawk a number of action figures over the years, but always of his better-known, yellow-red-and-navy-blue Defenders outfits. You want his original, much more clearly Batman-based Squadron Sinister suit? You need the My Hero Collection.