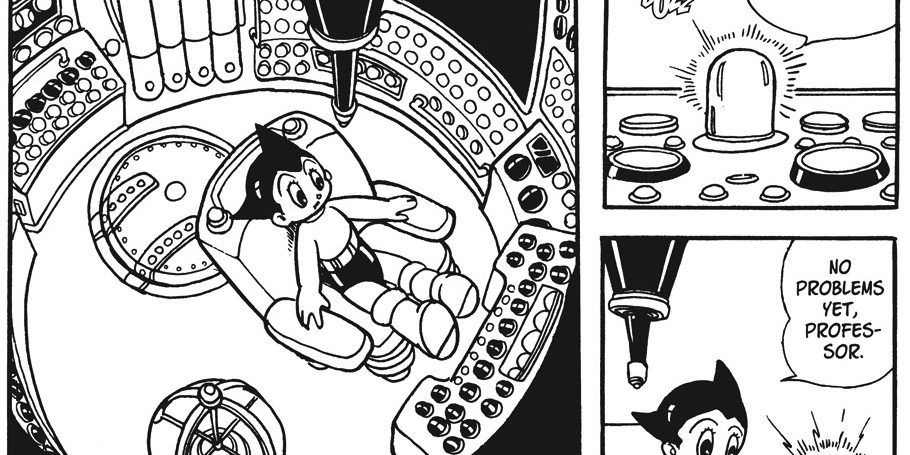 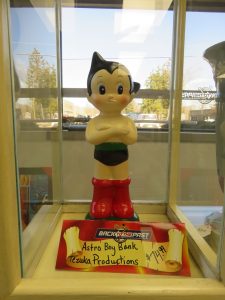 The Astro Boy Bank that stands sentinel over our gallery!

Welcome back to Consigned, Cool, & Collected, where we here at Back to the Past shine a spotlight on the collectible items we handle! Today, we’re breaking for our usual format of looking to our web stores and looking at an item that was available only in our showroom: an eight-inch ceramic Astro Boy bank!

The Birth of a Legend

The series was a massive hit, spawning a live action television adaption in 1959. I can’t find much information about that series, but it ran for a respectable-by-any-standard 65 episodes before ending in mid 1960. Live action just wasn’t the best medium for Mighty Atom’s stylized aesthetic, and it was adapted into a much more popular animated series that debuted on New Year’s Day 1963. It would run for 193 episodes and one feature length film, at its height being watched by 40% of Japan’s television owning households. 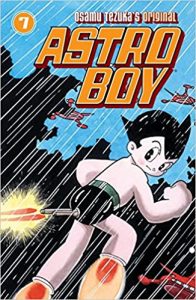 Astro Boy, complete with butt guns, as drawn by Osamu Tezuka himself!

The Birth of Weebs

On June 22, 1963, some six months after the series began in Japan, it debuted on American television as Astro Boy. While only actively produced until 1965 and dubbing only 104 episodes of the series, Astro Boy would continue to run in syndication until the 70s. It was the first anime series to cross the Pacific, quickly followed by the superficially similar Gigantor, and its success would lay the groundwork for the American Anime and Manga market that has absolutely exploded in the last twenty-five years.

And as influential as Astro Boy was in America, it was doubly so in Japan. Tezuka’s style would become the general standard in Anime and Manga (described by an American how-to-draw-manga book in the 90s as “Big Eyes, Small Mouth”), which combined with the man’s prolific output to earn him appellations like “The Father of Manga” and “The God of Manga”. On two continents, Astro Boy laid the seeds of Anime and Manga’s current pop cultural dominance.

This hand-painted ceramic bank, produced directly by animation studio Tezuka Productions, carries pop cultural significance greater than that of the average licensed piggy bank. It is a very early and iconic piece of Astro Boy memorabilia and we’ve read that Osamu Tezuka himself kept one in his office. We are very excited that this piece made its way to us and we’re glad that it made its way to a collector who would give it the place of honor it deserves. It is definitely an item worthy of being Consigned, Cool, & Collected.