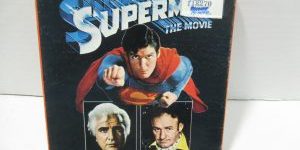 Welcome back to Consigned, Cool, and Collected, wherein we here at Back to the Past slow down for a second to do a deep dive into something particularly cool that’s come through our doors. Today, we’re looking at a selection of Super 8 movies that came in – including Superman: The Movie.

Bringing Movies to the Masses

“Super 8” is a movie film format introduced by Eastman Kodak in 1965, aimed at the home filmmaker. It improved on their previous 8mm film stock with better picture quality, larger exposure area, and a built-in capacity for sound recording. Additionally, the unexposed film was stored in pre-spooled cartridges that allowed filming to be done with a minimum of of hassle.

These innovations in affordable home-movie making popularized the practice to a much greater degree than before. In 1971, the format was adapted by the airline industry for in-flight movies – specially made cartridges containing a full two hour movie on Super 8 became the new standard until even smaller video cassettes caught on.

The format is still in use today, though is often used for artistic reasons rather than practical ones.

The First Frontier of Home Video

Standard 8mm prints of silent movies and cartoons had existed since that format’s introduction in 1932, but the limitations of the format meant that they generally did not include sound. The Super 8 format, being full color and carrying sound from the beginning, was a much better fit for releasing popular films at home.

That said, it was not a perfect format for home video release. Feature length films were often edited down to a sort of “digest” format or highlight reel. The Star Wars release we have boasts selected scenes including the Cantina scene and Destruction of the Death Star while our Super 8 copy of The Wizard of Oz is stated to be 16 minutes. It’s been a while since we last watched it, but we’re pretty sure the movie runs longer than that on DVD…

That said, these Super 8 “Best of” releases of popular movies make for a nifty pop cultural artifact from the pre-VHS era. In some ways, they’re analogous to the film clips and supercuts that populate YouTube today – except they were all officially released by the studio!

If you’ve got a pop cultural treasure like this hiding in your attic, it would be a good idea to run it by the experts here at Back to the Past before you stick a $0.25 sticker on it at your next garage sale. If you’re just looking to read about something cool, come back here in two weeks for another installment of Consigned, Cool, & Collected!