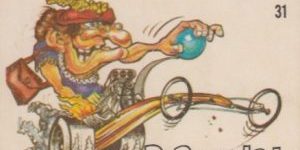 Welcome back to Hammer Drops, where we’re reaching back into the hazy mists of memory to make a point about auctions! The numbers are estimated and prone to the power of legendary tales, but the story is true and the lesson one to grow on.

This story predates my time with the store, and was related to me by our fearless leader Scott Lovejoy when discussing what he calls “The Magic of Auctions”: the store had purchased four complete sets of vintage Donruss Odd Rod sticker cards with the expectation that each set would sell  for $150-200. The first set was listed on eBay as a live auction, bidding went on for a week (as is our custom), and it closed for $800.

This obviously caught Scott & Pete (who, before ascending to General Manager around here, primarily managed the eBay store) off guard – what did they miss? What could possibly have been in that set that warranted an above-and-beyond price?

The Teachable Moment: The Magic of Auctions

The answer to that question was “not one ding-danged thing.” The other sets, which were identical to the first (we checked and double checked), sold for the expected prices. It just happened that two people who really wanted a complete set of Odd Rods found our listing and duked it out until one them folded. Maybe it was a childhood wish, maybe it was a birthday gift, maybe Odd Rod cards contain a never-before-discovered treasure map and these guys knew it, who knows? It was just the right lot on at the right time for these guys.

After Scott described that, I realized I’d contributed to that magic myself in the past: December 2017 or so, we had a complete run of All-Star Squadron #1-67 up for bid at one of our auctions. I, being the JSA stan that I am, ducked out of a Christmas party to attend the auction personally (I was not yet a part of the regular auction team then). Runs like that sell for between $90 & $120, but on this night I bid something like $175 before being forced to throw in the towel. It’s not that I, or the guy who bid $200, knew anything that anyone else didn’t, we just wanted it that badly. I’m still mad that one got away, but I managed to pick up a complete set of DC Archive Edition Justice Society hardcover reprints for $120 some six months later and that salved the wound pretty well.

To sum it all up, the record high price for an item has to come from somewhere and it usually comes from the magic of an auction: Two or more collectors dead set that they’re getting that item, right there, right now, price be danged. And if you want to spin some of that magic on your collection, you should contact us here at Back to the Past to talk about consigning your treasures.

Come back in two weeks for even more tips, tricks, and tales from Hammer Drops!