Boba Fett? Where?! (Or “Asking Price Vs. Realized Price”) 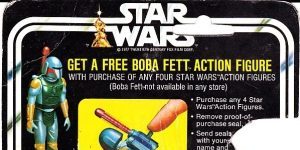 Welcome back to Hammer Drops, wherein we look at what can be learned from auctions blocks and collectibles sold both near and far. Today we’re turning our eyes toward another major headline, the “$225k Boba Fett Action Figure” that popped up on eBay, not too long ago.

Back in 1978, Star Wars was just getting started as a pop cultural juggernaut and its toys ruled shelves. Kenner advertised a special mail-away figure based on a then-upcoming character named Boba Fett, set to debut in the Star Wars Holiday Special before appearing The Empire Strikes Back, who would come with a nifty action feature: a rocket-firing backpack!

However, safety concerns scotched that particular feature before the figure entered production. Even so, the mysterious armored bounty hunter’s toy captured a generation’s imagination and quite possibly lead to the character’s enduring popularity in spite of his limited screen time.

That said, toy production requires the creation of prototypes and test figures and proofs-of-concept at various stages. Boba Fett would be no exception, thus it’s estimated that around thirty genuine rocket-firing Boba Fett figures are in existence from that pre-production run, and the most recent realized price came in at $185,850 last November from Hake’s Auctions.

The figure has been a holy grail for Star Wars collectors for decades, an unrealized childhood desire that can only be possessed by exceedingly few people worldwide. Gentle Giant Ltd produced a twelve inch tribute version in 2013, which is honestly the closest the great majority of Fett fans are ever going to get to owning one.

The Teachable Moment: People Can Ask What They Want But They May Not Get It

eBay is a universal price guide, as long as you know how to use it. Many is the phone call we get from excited people who have seen that Beanie Babies, Black Diamond VHS tapes, and all manner of common, arguably collectible items are “WORTH THOUSANDS OF DOLLARS” thanks to their cursory eBay search. Even searching “Sold Listings” can be misleading, because the fact is that scams and simple human pride can lead to exorbitant “sale” prices from an auction with exactly one bidder.

And that, friends, is why it never hurts to consult with an expert like Back to the Past Collectibles! We’ll certainly use eBay as a “universal price guide,” but augmented by our experience and other pricing resources. Unrealistic expectations, even on items with some serious value, have burned more than one inexperienced seller who left money on the table in the pursuit of a mythical higher figure that they will never get.

We certainly hope k95zt01 got a good price for the Boba Fett prototype, as they appear to be a reputable source for ultra-high-end Star Wars merchandise. Hitting a new price peak in excess of the current record by 17% this quickly would be a stunning accomplishment! Just keep in mind that a seller can ask whatever they want, but it’s the market that will determine how much cash is actually passed in the transaction.

If you have items to sell or need assistance evaluating, give Back to the Past Collectibles a call. We’re standing by when you need help!