The Superman of Gold 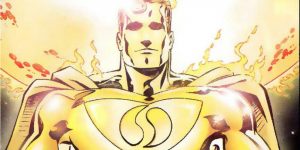 Welcome back to Consigned, Cool, & Collected, wherein we examine the “Cool Factor” of items that come through our doors. Today’s item is a special edition Gold Superman figure created in celebration of the 30th Anniversary of the Super Powers line, with an interesting history behind it’s origins.

In 1985, Kenner’s Super Powers Collection had its second wave of figures in stores and its third, scheduled for 1986, deep into production. In order to be ready for 1987-8’s anticipated fourth and fifth waves of figures, they prepared an extensive internal presentation with any eye toward the line’s future.

1988 marked the 50th anniversary of Action Comics #1, best known as the first appearance of Superman. In honor of the Man of Steel’s golden anniversary, Kenner planned vac-metalized “Golden Editions” of their standard Superman figure, their take on the Supermobile vehicle, and a newly designed action figure carrying case shaped like Superman that wasn’t wholly dissimilar in concept to their C-3PO carrying case for Star Wars figures.

And then, none of it came to pass. There was no Wave Four or beyond.

Celebrating A Pearl Anniversary With Some Gold

Due to the sometimes head-scratching depth of its character choices (Example: Legion of Super-Heroes foe Tyr‘s appearance in wave three) and large roster, The Super Powers Collection maintains a legendary status among comic fan toy collectors to this day. To celebrate its thirtieth anniversary in 2014, Mattel put out two waves of their DC Classics 6″ figures in throwback Super Powers packaging with color/design schemes to match. The second wave was a deep dive geared at celebrating the figures-that-never-were which had gained some notoriety among the line’s more dedicated fans:

All of these were surprising choices for Mattel to make, even in a toyline geared specifically at collectors. We applaud their efforts, as Gold Superman is a pretty perfect realization of the original concept art…although we’d bet that the gold on the proposed original would have more closely resembled the original C-3PO than the gold paint version we got.

You can check out these figures and a lot more on Back to the Past’s eBay store right here!

We’ll see you back here in two weeks for even more stuff that’s been Consigned, Cool, & Collected.