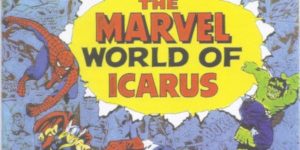 Welcome back to a new Fabulous Find. This week I’ll be taking a look at a rather rare album, or LP, by the name of The Marvel World of Icarus. Yep, the band name is Icarus and you probably have never heard of them! Well, first let me tell you of the band, then I’ll get to the album.

It’s hard to find out much information regarding the band and it’s members, but it appears that Icarus formed back in 1968, across the pond, in England. They performed through the next couple of years and went through a number of band member changes.

The members at the time of this album were, as follows; first up, the singer, Steve Hart, next is the guitarist, John Etheridge. The bass player was, Jim Wyllie, and on keyboards was, Iain Hines. The drummer was, Peter Curtain and providing additional instruments, like sax, flute and the clarinet was, Norrie Devine.

Their sound can be considered progressive rock, or prog-rock. The album was released on Pye International Records (#NSPL 28161) in 1972.

But you might not be interested in any of this information, except that the album is all about Marvel Comics characters! And the cover that was used features Marvel heroes as drawn by Jack Kirby and John Romita Sr. Or it looks that way to me. You can judge each of the figures for yourself.

And while I’m at it, I guess I should show you the reverse side of the album, as well. So here you go:

I don’t know about you, but I find the reverse side rather creepy for some reason!

Some time after the turn of the century, the album was re-released on cd, but it’s the vinyl album that is really collectible and worth a few dollars, so keep an eye out for it and be sure to pick it up if you get the chance.

So, is it any good, you might ask? Well, of course that subjective, isn’t it? But I find it … okay. Not great, but not awful either Just somewhere in between the two extremes.

If you just want to here a couple of examples of the music from the Marvel World of Icarus, then head over to YouTube and query the album. But because I’m such a great guy, here is the third track off the album entitled; Fantastic Four.

Thanks for stopping by and I hope you enjoyed this month’s post.