Unbeatable Value (or “The Peaks Raise Up The Valleys”) 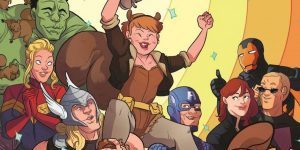 Welcome back to Hammer Drops, where we look at what realized prices at our auctions can teach about value. We’ve got another “over time” example, originating with lot #301 from our June 14th session, Marvel Super-Heroes Winter Special #1.

Marvel Super-Heroes was a quarterly anthology series that ran from 1990 to 1993 featuring one-off short tales about the adventures of Marvel heroes both well-known (like Wolverine) and obscure (like The Blue Shield). Its eighth installment, Winter 1991, boasted one of the last major Marvel Comics stories drawn by legendary Spider-Man co-creator Steve Ditko, a tale that pit Iron Man against Armored Despot Dr. Doom with the help of a brand new teen hero with strange superpowers – Squirrel Girl.

After helping Shellhead trounce Doctor Doom, Squirrel Girl quickly faded into obscurity. She returned to the limelight in the 2005 mini-series Great Lakes Avengers: Missassembled (and follow-up one-shots) as that comedic team’s new “ace in the hole” powerhouse. She’d pop up again in 2011 New Avengers #7, wherein she became the team’s live-in nanny. And in 2015, she landed her own ongoing series and full membership on an Avengers team.

The Teachable Moment: The Peaks Can Raise The Valleys

During the height of her ongoing series’ popularity in 2017, Squirrel Girl was the lead character in the pilot episode for a comedic TV show, with ties to the MCU, loosely based on Marvel’s New Warriors. Unfortunately, the series was not picked up and the pilot will likely never be seen by the public. Squirrel Girl’s tenure as an Avenger ended in April 2018 with Avengers #690 while her self-titled series ended after fifty-eight issues in November 2019.

So Squirrel Girl is clearly not at the height of her powers anymore, but Marvel Winter Special 1991 still closed for $80 on our auction block. Why? Well, first Squirrel Girl’s memetic popularity in the mid-00s raised her debut out of the dollar bins. Then, her ongoing series raised it from a $10-15 issue to the $25-40 range. Next, her other media aspirations pushed the issue north of $100. The end of her ongoing series and cancellation of her TV show have seen things begin to dip, but you will most likely never find this issue in dollar bins again.

You can cancel a TV show, you can cancel an ongoing series, but you can never make a character’s new fans forget they exist.  Once you’ve hooked an audience, you’ve at least got some of ’em for life and the corresponding bump in the price guide numbers doesn’t go away entirely (though it does level off).

See you back here again, in two weeks, for more Hammer Drops!