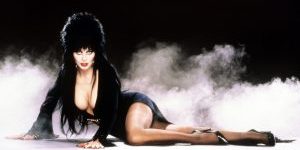 Welcome back to Consigned, Cool, & Collected, where we talk about the cool-factor of our recent consignments. Today we’re looking at a nifty Electric Tiki Tooned-Up Television maquette of Elvira, Mistress of the Dark.

Last week, we talked a little bit about Maila Nurmi’s 1950s horror host character, the first-of-her-kind Vampira. By 1981, horror hosts had become beloved pop cultural fixtures and Los Angeles’ KHJ-TV approached Nurmi about reviving the character with a new actress. Initially on board, Nurmi balked at the station’s choice of actress and pulled her support. This forced comedienne/showgirl Cassandra Peterson to develop her own character: the punky, gothic valley girl named Elvira, Mistress of the Dark.

Elvira’s Movie Macabre was much more commercially successful than The Vampira Show, ultimately being syndicated nationwide. Peterson, an experienced improvisational comedian, made Elvira a fixture of talk shows, Halloween ad campaigns, and the annual Knott’s Scary Farm event. Even after the series ended, Elvira continued to appear in comic books and her own feature film.

Electric Tiki Designs was founded in 2001 by Tracy M. Lee after he got burned out on working animated features. The studio specializes in statues of pop cultural icons, often in a traditionally cartoony style. One of their flagship lines was the Tooned Up Television brand of limited edition maquettes which captured iconic TV characters from shows like I Dream of Jeannie, Sanford & Son, Greatest American Hero, and more in the simplified style of American cartoons.

Elvira received an entry in the that line circa 2004, in its seventh wave. Quite honestly, we’re surprised it took even that long for Electric Tiki to get to her, but it was well worth the wait!

We’ll see you back here in two weeks to talk about another item that is Consigned, Cool, & Collected!