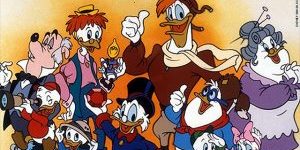 Welcome back to Consigned, Cool, & Collected! Here, we examine the pop-cultural history behind some of our coolest consignments that you could possibly add to your collection. This week’s piece is a Scrooge McDuck mini-bust from Grand Jester’s Disney Showcase line.

1947’s Four Color Comics #178 was a Christmas-themed issues of Disney Duck tales, including  a tale about Donald Duck and his nephews visiting a rich, miserly, mean old uncle named Scrooge McDuck. The character was faintly antagonistic in his first appearance but he quickly became a recurring character and, while still grouchy, much kinder to his nephew and great nephews. His original characterization lives on, however, in the form of his arch-rival Flintheart Glomgold.

Scrooge proved popular enough that he would gain his own ongoing series in 1953, which ran almost continuously under a number of different publishers until 2011. Scrooge made his animation debut in 1967 in an educational short about (what else) money, followed in 1983 with the lead role in Mickey’s Christmas Carol, but he really took off in animation and gained mass appeal in 1987 with the launch of the hit DuckTales TV series.

Grand Jester Studios was founded in 2008 to make collectible statues/mini-busts/etc. Since the very beginning, it has been strongly associated with Disney characters: its first offering was a limited edition statue of Dave Stevens’ Rocketeer, an indie comics character whose pop-cultural longevity was secured by a Disney feature.

This Scrooge McDuck mini-bust was one of their earliest creations, debuting in 2009. Disney animator Rubén Procopio, credited with re-popularizing the use of Maquettes in the animation industry back in the 80s, created the original sculpt. It was limited to a run of 1500 and our particular specimen was the seventy-seventh off the line, which doesn’t count for anything other than being cool.

Check out Scrooge McDuck, along with a ton of other amazing collectible pieces on Back to the Past’s eBay store right here!

We’ll see you back here in two weeks for another installment of Consigned, Cool, & Collected!