Riddle Me This! (or “Cross Media Symbiosis”) 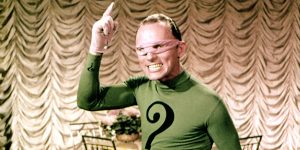 Welcome to the latest installment of Hammer Drops, looking at what collectibles sold at auction for how much and why they do. Today we’re looking at Lot #74 from our 7/8 Key Comics & Collectible Toys Appetizer auction, a VG/F copy of 1966’s Batman #179.

The Riddler made his debut in Detective Comics #140 in 1948, appearing again two issues later. He did not turn up again until 1965’s Batman #171, which came out while Greenway Productions was developing its iconic Batman TV series. Some elements from that story were directly adapted into Lorenzo Semple’s scripts for “Hi-Diddle Riddle/Smack In The Middle,” the series two part pilot episode.

This seems to have lead pretty directly to The Riddler’s second Silver Age appearance in Batman #179, a copy of which we recently auctioned off. It was only the fourth appearance of the character in the eighteen years since his debut. The issue has a cover date of March 1966 and, since DC cover dates were approximately two months ahead of release dates, it would have hit newsstands and spinner racks in January of that year. The Batman TV series debuted on January 12-13, 1966, meaning that we’re thinking DC Comics deliberately timed the next comic appearance of The Riddler to coincide with his TV debut.

The Riddler would go on to appear in eleven episodes of the series plus its 1966 feature film spin-off, with six more comic appearances coming during the show’s run.

The Teachable Moment: The Symbiotic Relationship Between Comics & Other Media

For the last 20 or so years, ever since the X-Men started wearing leather, comic fans have been bemoaning the influence that silver & small screen adaptations have had on the four color source material. That complaint ignores the fact that this relationship has existed since the word “go”: after all, Batman’s iconic Batcave headquarters is itself an invention of the 1943 Batman film serial!

The more subtle influence that “other media” exposure brings to comic books is imbuing characters with staying power. The Riddler was at best a very minor bat-foe before the 1-2 punch of “Hi-Diddle Riddle” and Batman #179 in January 1966. He was instantly cemented in the minds of new Batman fans around the country as an iconic Batman foe, and that belief then made it true. That, friends, is why Batman #179 can stand on its on own when coming to our auction block while issues around it might be better off sold in a run or group.

We recently sold a CGC 9.8 copy of Year of the Villain: Hell Arisen #3, 1st appearance of brand new Bat-Foe Punchline, for $120 at auction. Punchline’s getting a major push in DC comics right now and that hype is clearly paying off, but her sustained prominence (and therefore value) would be greatly helped by an appearance on Batwoman or in The Batman or Flashpoint in the near future. Or even 18 years from now, if The Riddler is any indication…

Getting the best value for your collection requires striking while the iron is hot, but (to overextend the metaphor) the heat source is often fickle and requires constant monitoring – a service that Back to the Past Collectibles is more than happy to provide. Give us a call if you need help with your collection!