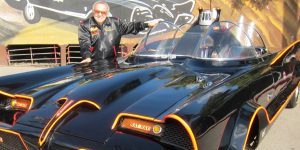 Welcome back to Consigned, Cool, & Collected, wherein we have a look at some particular “cool factor” in the stuff our wonderful consignors bring us. Today, we’re looking at a Hot Weels 1:18 scale Batmobile based on the 1966 Batman TV series (which isn’t the only cool Barris Batmobile merch in there).

While the Batmobile is an instantly recognizable piece of pop cultural Americana today, that wasn’t entirely the case in the mid-60s. From 1941 to 1964, the car’s design had largely been variations on one theme and it was one that would not have lent itself well to live action productions of the day. The 1943 and 1949 film serials simply used normal cars, and there weren’t any animated adaptations during this time.

The “New Look” Batman era, beginning in 1964, saw the Dynamic Duo’s vehicle redesigned as a two-seater convertible, seen above.

And then came George Barris. He was given just three weeks in mid-1965 to design a car worthy of Greenway Productions’ Batman, set to debut in January 1966, and its comically serious take on the Dark Knight Detective.

He took Ford’s Lincoln Futura concept car and modified it as needed: extending the fins, redesigning the glass bubble windshield to be open top, and adding a bunch of purely cosmetic bits and bobs. This allowed it to look like a car that could operate on the road while still looking dramatically different from any other vehicle out there. It appeared prominently in all 120 episodes of the series, as well as the feature film, and was naturally adapted into comics. It would continue to inspire the Batmobile in animation, if not necessarily the comics, for the next 20 years. Not bad for three weeks work.

The Meeting of Two Custom Car Icons of the 1960s

Mattel co-founder Elliot Handler came up with the idea for Hot Wheels in the late 60s. Seeing as Matchbox, then the leader in the miniature die-cast car market, only made cars that were realistic and stock, Handler proposed a line of toys based on the Hot Rod/Custom Car culture of the day.  The first wave of cars, nicknamed the Sweet 16, proved to be a massive success that re-shaped the entire design philosophy behind the die-cast car industry.

Hot Wheels continues to be a success to this very day, and in 2007 they FINALLY licensed the Barris Batmobile for use in their line. One would think that the two of the biggest pop-cultural phenomenons in Custom Cars of the mid-60s would have crossed paths sooner! They’ve re-issued the 1:64 scale version as recently as 2020, but the larger 1:18 scale collector’s edition version we’ve got seems to be decidedly less ubiquitous.

What treasures might you have that would bring our turbines to speed? Contact us today and find out!

And that’s it for this round, we’ll see you back here in two weeks for something else that’s Consigned, Cool, and Collected!