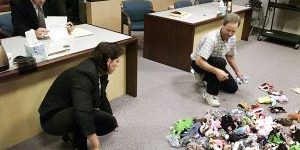 Welcome back to Hammer Drops, where we navigate the rocky waters of the collectibles biz with realized prices to guide us! Today we’re looking back a couple of years to make a point about notability, bubbles, and sustained value by answering the question “What’s the difference between $17.50 worth of Beanie Babies & $130 worth of Beanie Babies?”

Hitting the market in 1996, Beanie Babies were a masterpiece of marketing savvy. Essentially bean bags with cute faces, they were initially a small production run specialty store item. By they time they hit the general market through stores like Hallmark, they’d built up a considerable mystique as a limited edition collectible. By the end of the decade, they were considered one of the most desired collectibles around, and we’re talking “trample a child to get to rare one firsts” levels of desire, to be specific. Doral360 has a super-informative breakdown of the craze here.

Fast forward to 20 years later and bulging boxes of Beanie Babies are going for an average of twentyish bucks on our auction block. Notably, Lot 38 (pictured above) sold for $17.50 or $0.35 per Beanie Baby. A better value to our consignor than having them in their basement, but not exactly a sum worth crawling around on the floor of divorce court over unless you’re feeling particularly petty.

There were three notable exceptions to this average realized price that crossed the block in our 12/14/2019 session. Three lots of one Beanie Baby each sold for $40, $50, & $40 respectively.

Those three Beanies were of iconic Toho Kaiju Mothra, King Ghiddorah, and Godzilla, and that’s why they were worth some much more serious coin than their more generic counterparts. Beanie Babies are far from alone when it comes to 90s toys failing to hold or appreciate in value, but Godzilla toys from Trendmasters are largely exempt from that rule of thumb as well as well – a 1994 Godzilla: King of the Monsters 40th Anniversary Collector’s Edition figure pack sold for $100 at one of our auctions in 2018.

Which leaves us with the question of “why?” Scott Lovejoy, our head honcho, and I each have part of the explanation for why this is. Mine is from the supply side: Toho licenses out their monsters individually rather than as a universe – it’s a major part of why early American Godzilla comics created their own monsters rather than utilize Toho’s. That means that there’s an extra cost to creating a comprehensive Godzilla toyline and therefore such lines are rarer than those for other franchises.

Scott’s explanation is from the demand side. Simply put, Godzilla & his pals have been internationally beloved since 1956 and there are no signs of that stopping any time soon. This means that, unlike for Splash The Whale, there’s a built-in fanbase for the Toho Beanies that includes folks from the Silent Generation up through the still-being-born Generation Alpha. Even if you’re young or blessed enough to have never heard the words “Beanie Baby,” there’s still a strong chance you have some feelings about Godzilla.

It can truthfully be said that Beanie Babies are worth $0.35 each these days. It’s equally truthful to say that Beanie Babies can be worth $40 a piece. The important piece is know which ones are which, which is where Back to the Past’s expertise comes into the picture, so if we can help you out, then contact us today!

We’ll see you back here in two weeks for another look at the informative and sometimes contradictory world of value here in Hammer Drops.