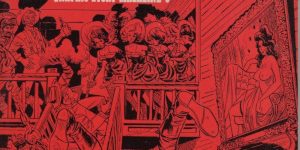 Both Fantasy Illustrated and Graphic Story Magazine were published by super fan, Bill Spicer. FI #1 was published during the Winter of 1963 and was published through issue #7, dated the Spring of 1967. It then changed name and became GSM from issue # 8, dated the Fall of 1967, through the final issue, #16, in 1974.

Today, I’m looking at issue #9, dated the Summer of 1968. I have the red cover version, as you can see below. I understand it was also published with a brown cover, though I’ve never seen that edition. I believe that they were published concurrently and one isn’t a first printing and the other color a second printing. If someone knows differently, please let me know.

Here’s the cover to issue number 9:

The cover is actually a wraparound cover, so I guess I should go ahead and show the back, or reverse right now:

One interesting fact, it that there is no Table of Contents in this fanzine, so the back page must serve in this capacity!

Things start out immediately on the inside of the front cover, with Spicer listing the Graphic Story Magazine Outstanding Graphic Stories of 1967 Poll results. Top results included “Him” from Stan Lee & Jack Kirby from Fantastic Four # 66 & 67, “The Aliens” by Russ Manning from Magnus, Robot Fighter # 17, 18 & 19, “Showdown On Hydra Island” by Jim Steranko from Strange Tales # 156, 157 & 158, as well as, “Mr. A” by Steve Ditko from Witzend #3.

Then the fanzine jumps right into letters on page 3. Letters this issue are from well known fans, as well as, professionals, such as; Richard Kyle, Jeff Jones, John Benson, Jim Jones and Tom Sutton.

Following the letters there is a ten page strip, written and drawn by George Metzger. The story is entitled; “Mind Blast” and features his characters Master Tyme and Mobius Tripp! I’m pretty sure they first appeared in the previous issue (#8).

Here is the first page from this strip:

Next is a long interview with Dan Noonan. Noonan began his career in the animation departments of Terrytoons and the Disney Studios in the 1930s. He was a staff artist at Western Publishing from the early 1940s to 1951. He drew for such Dell/Western titles as Animal Comics, Our Gang, Fairytale Parade and Raggedy Ann + Andy, and also assisted Walt Kelly on Pogo. In 1969 he was art director of Wham-O Comics.

From the 1950s throughout the 1970s he was mainly active in animation however, working as a lay-out artist for subsequently Hanna-Barbera (‘Yogi Bear’, ‘The Flintstones’), Cambria Productions (‘Clutch Cargo’, ‘Space Angel’, ‘The New Three Stooges’), Filmation Associates (‘Superboy’, ‘Batman) and then Hanna-Barbera again (‘Harlem Globetrotters’, ‘C.B. Bears’, etc.) until around 1980. So even if you don’t know his name, I’m sure you know his work!

Following this interview, is a two person, with two perspectives, review of Gil Kane‘s His Name is Savage #1.

Next up is a column entitled; “The Sons of Aesop”, written by Mike Barrier, which looks at comics and newspaper comic strips featuring “Funny Animals”.

Then wrapping up the issue is another long strip, written and drawn by Vincent Davis, entitled; “The Last Weapon”, based on a story by Robert Sheckley. It runs twenty-one pages, as a matter of fact.

Here is the first page of that strip, to give you a flavor of it:

Then on the inside of the back page is an illustration by Alex Toth, saying … Coming: The Fox. And then the we turn the last page to see the back of the fanzine and that wraparound cover. Fifty-two pages of fanzine goodness ends there.

This is a very dense issue, with two long strips and lots and lots of words to keep the reader engrossed for hours. Well worth the seventy-five cent price tag that it cost back in 1968.

Not only do I highly recommend this issue, but any others from this series, or the earlier Fantasy Illustrated issues, that you might find in your searches at stores, conventions, auctions and of course eBay. Generally, you can expect to pay around twenty to twenty-five dollars when you find them. Snap them up is you can find them cheaper! You will not be disappointed!

Thanks for stopping by.