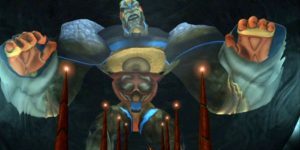 Welcome back to Consigned, Cool, & Collected, where we give you a deep dive into the cool items our consignors bring us. Today’s specimen is the 2016 Transformers Generations Platinum Edition Optimus Primal, made by Hasbro to celebrate the Year of the Monkey.

By 1995, it was clear that Hasbro’s attempt to revive interest in their Transformers line with “Generation 2” was not the hit they hoped for. They decided to take drastic action, revamping the IP with Beast Wars – alt modes like cars, jets, and robotic dinosaurs were out, “realistic” animal alt modes were in.

Some familiar aspects, however, stuck around, most notably the names Megatron and Optimus (now Primal rather than Prime) as the leaders. While the initial version of Optimus Primal was a bat, the second version had the alt mode that would be adapted into the animated series and remain the standard for the character: a gorilla.

The Beast iteration of Transformers ended in 2001, though innovations both in toy design and the inclusion of “organic” beast modes persist to this day and the Beast Wars is a cult favorite among Millenial transfans. With that in mind, Hasbro celebrated the Chinese Zodiac’s Year of the Monkey in 2016 with a special edition of Optimus Primal as part of their Transformers Generations line.

The toy itself is re-release of 2001’s Air Attack Optimus Primal, recolored to match the classic Optimus Prime color scheme and in a particularly collectible package. It is worth noting that, being a gorilla, Optimus Primal is not a monkey but an ape. While that difference MIGHT just be a bit too much of a split hair for Hasbro’s marketing department, celebrating the Year of the Monkey with Primal could potentially be a reference to the fandom’s longrunning “Trukk Not Munky” catchphrase, which dates back to when the Beast Wars was new.

Do you have something cool you’d like us to bring to market? Contact us today and let us know what we can do for you!

And that’s all for this week, come back in a fortnight for another look at something Consigned, Cool, & Collected!