The Justice Society in Other Media, Part 2: Live Action 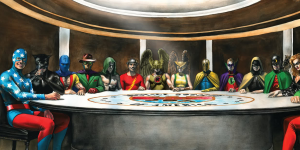 We return to our previously scheduled History of the Justice Society in Other Media, already in progress

There’s still no trailer for Stargirl! What is that? So we’re looking at the JSA’s decidedly disappointing history in Live Action to tide me over.

The JSA made their live-action debut in the eleventh episode of Smallville’s ninth season, “Absolute Justice“. It aired as a two hour (with commercials) telefilm and was a suitable introduction to the world’s first superhero team, as well as a nice checkpoint on the show’s evolution to having an overt Justice League.

Chloe Sullivan, the super-hacker known as Watchtower, is confronted in an alley by a man named Slyvester “Star-Spangled Kid” Pemberton. He’s not that uncommon a sight for her, dressed in a colorful costume and wielding a staff with control over light, but he’s killed by an ice-powered assassin before they can really talk.

Watchtower begins investigating his death alongside her allies The Blur (Clark Kent), Green Arrow (Oliver Queen), and Martian Manhunter (John Jones). They discover the secret history of the Justice Society of America – the first team of superhuman vigilantes to unite for the common good, driven into retirement and obscurity by the shadowy government agency Checkmate years ago. The heroes of today will team up with Sly’s ex-teammates Hawkman (Carter Hall) and Dr. Fate (Kent Nelson), as well as his protege Stargirl (Courtney Whitmore) to battle the vengeful Icicle and end his vendetta against the JSA!

The surviving JSA members, Hawkman and Stargirl, would effectively join Watchtower’s network of heroes (the proto Justice League) for the show’s final two seasons. Hawkman would even get a heroic death and team-uniting funeral. The team’s legacy would continue in the Smallville Season 11 comics with the Teen Titans, mentored by the JSA’s Flash Jay Garrick (in memory of Hawkman) and including Stargirl in its membership.

The second season of Legends of Tomorrow regrettably introduced the JSA to the Arrowverse. The first two episodes featured the time-traveling Legends joining forces with the Justice Society of America – consisting of Hourman, Dr. Mid-Nite, Commander Steel (from the All-Star Squadron), Stargirl (typically a modern day member of the team), Obsidian (ditto), and Vixen (traditionally not related to the JSA at all) – to battle the Nazis in the 40s. Together, they prevent the time-traveling Reverse Flash from giving the Nazis a super-soldier and preserve the timeline, albeit at the cost of Hourman’s life.

Despite the team disappearing in the mid-50s, the JSA’s influence was felt throughout the season. Besides being the catalyst for the “Invasion!” crossover mini-series, attracting the Dominators to Earth in the first place, their members dispersed through time from 1956 to safeguard the reality altering Spear of Destiny against the Reverse Flash:

Despite the JSA itself suffered a somewhat lackluster and stupid (Stargirl is Merlin? Really?) showing on LoT, some of its comic book members have done quite well around the Arrowverse:

Which brings us to Stargirl, set to debut next year on DC Universe. Very little is known about it at this time, but here goes:

But most importantly, the show is executive produced Geoff Johns. As in the co-creator of Stargirl. As in one of the key figures in reviving the popularity of the JSA in the late 90s. As in the guy who wrote “Absolute Justice”.