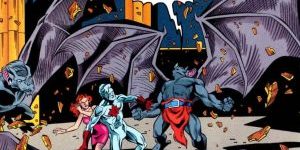 Welcome back to Strange Times & Places, where we’re looking at something that’s canon to one fictional universe while being an AU homage to another – “The Flashback of Notre Dame” from JLA Showcase 80-Page Giant #1!

It would  probably count as an Imaginary Story by the rules of this column: characters from distinct universe/story are remolded to fit into another world. What’s unusual is that instead of, say, Batman or Superman being changed to fit into a classic story, this takes the stars of a classic after-school cartoon and fits them into the DC Universe.

Set during the glory days of the Justice League Europe, Captain Atom and his fiancé Plastique are spending a romantic evening out on the town in Paris, France! Their time together is unfortunately interrupted when their kiss on the roof of Notre Dame inadvertently frees a clan of gargoyles from a 1000-year stone sleep curse, meaning the JLE will have to be called into round up the terrified-but-well-meaning family of “monsters”!

Children of the 90s have no doubt noticed that the premise of this story is very close to that of Disney’s Gargoyles, one of the best cartoons of the 90s…and there’s a great reason for that: this story was written by Gargoyles creator Greg Weisman. Mr. Weisman also co-wrote the Post-Crisis Captain Atom comic with Cary Bates, meaning this story (circa 2000) was old home week for him.

Because Weisman approaches everything he does with the same joie de vivre and attention to detail as fans, the in-jokes and references to Gargoyles within this tale are incredibly specific. The best example of that is when Behemoth, the clan’s leader and stand-in for Goliath, introduces the JLE to his clanmates Cyrano, Roxanne, and Christian. These are Frenched-up versions of Othello, Iago, & Desdemona, characters who appeared in all of five episodes or less.

Do you have no earthly clue what I’m talking about? Well, Gargoyles is bingeable the streaming service launched by a certain cyberpunk-megacorporation-in-the-making this morning…