The Monster, heroic from the first.

Welcome back to Strange Times & Places, where we this week we’ll see what happens when you combine one of comics’ greatest heroes with one of literature’s greatest monster in the 1999 prestige format Elseworlds one-shot The Superman Monster. 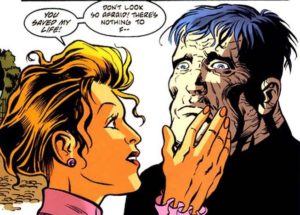 Blasphemous young scientist Viktor Luthor uses the scientific teachings of an alien capsule (containing a baby skeleton) to bring his life’s work, the resurrection of dead human tissue, to fruition! Unfortunately, he quickly comes to see his childlike corpse puzzle as a monster…and the fact that its faster than a speeding bullet, more powerful than a locomotive, and can leap tall buildings in a single bound doesn’t help disabuse him of that notion. The goodhearted creature is left to fend for itself as its creator scours the countryside with vigilante mobs…and prepares for his marriage to Eloise Edge. 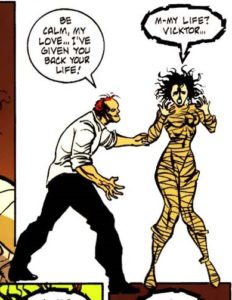 The story works very, very well, combining elements of two very different stories into one satisfying tale. Luthor’s hatred of Superman slides easily into Dr. Frankenstein’s disgust with his creation, Superman’s adoptive parents The Kents are reimagined as a kindly couple who give the creature the compassion and education he needs, and Lois Lane combines with Elizabeth Frankenstein AND Universal’s Bride of Frankenstein to give Luthor a line to cross and give Superman his happy ending. It’s a great Elseworlds tale, no less than you’d expect from the writing team of Dan Abnett and Andy Lanning, and definitely deserves a spot on your Halloween reading list. 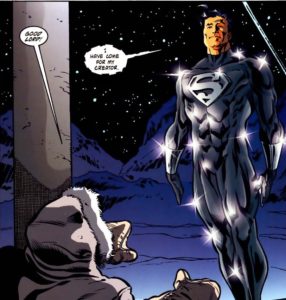 Superman’s Fortress of Solitude pairs well with the ending of Shelley’s novel.

NEXT WEEK: Tokusatsu Gesundheit examines one of the most monstrous Showa-era heroes, Shin Kamen Rider.