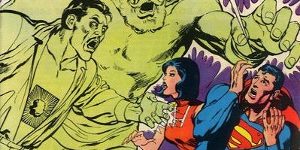 Hey, ho, it’s almost Halloween, so how’s about I dig into the comic vault and pull out a DC Comic this week featuring a supernatural element?  Sound good?  Okay, how about Superman # 214, cover dated February 1969?  Done!

So let’s jump right in.  Take a look at the cover to that issue, as drawn by Neal Adams: 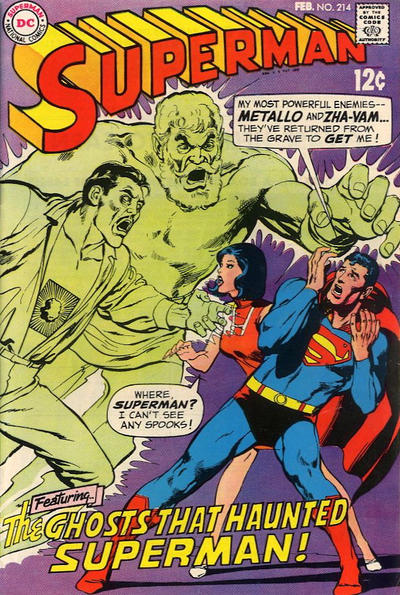 Mr. Adams provided both the pencils and the inks for this cover, that features Superman and Lois Lane being menaced by the ghosts of Metallo and Zha-Vam.  But as you can see from the word balloons on this cover, only Superman can see the ghosts, Lois for some reason can not see them.  I think this is a cover that makes the reader want to pick it up and find out what’s going on, don’t you?

As the cover stated, the lead story is entitled; “The Ghosts That Haunted Superman!”.  It is written by Cary Bates with interior artwork by Curt Swan (pencils) and Jack Abel (inks).  Like most of us, Superman has never believed in “spooks returning from the grave to wreak vengeance on their enemies” but now he is faced with that very situation, or is he?

The story opens with Superman drilling into the earth’s core on behalf of the Metropolis Geological Institute, in search of a rare element.  As he collects some of the element, he is astounded to be confronted by a green glowing figure of his dead foe, the Composite Superman, a villain who had the combined power of the Legion of Super-Heroes from the 30th Century.  Superman battled this foe earlier, in World’s Finest Comics # 142 & 168.

Superman strikes out at him, only to pass completely through him.  Then using Element Lad’s powers, the Composite Superman changes the rare metal samples to green Kryptonite.  Then using Star Boy’s powers, he makes Superman super heavy.  Superman refuses to give up and struggles to free himself, only to have the Composite Superman disappear and all traces of weight and the green Kryptonite disappear with him.

Superman returns to his guise as Clark Kent and checks in at the Daily Planet.  As he is about to greet Lois Lane, he sees a green glowing figure of his deceased foe, Metallo (last seen in Superman # 252).  Metallo appears to be going after Lois, so Clark jumps between Lois and the glowing figure, shouting at it to keep away from Lois.  The figure disappears leaving Clark to try to explain what is going on to Lois, who has not seen the “ghost”.

Of course, this sets off Lois’s belief that Clark and Superman are one in the same again, and she decides to tag along with Clark on his next assignment from Perry White.  They go to a hotel to interview someone and once again a “ghost” appears.  In fact it’s the ghost of Metallo, once again.  Clark makes up an excuse and leave Lois and quickly changes into Superman and engages in a two (2) page battle with the ghost of Metallo.

Next thing we see is Lois being captured and being raised into the air.  Superman follows, only to be attacked by the ghost of Zha-Vam (Superman fought Zha-Vam in Action Comics # 351, 352 & 353).  Eventually this ghost too vanishes and Superman is able to retrieve Lois and bring her back down to Earth.  At this point Superman uses his “super-vocal powers” to send a message out into space, requesting that whoever, or whatever they are, their masquerades are over and that they should appear before him.

Once the explanation is given, Superman goes with Nador, to the next meeting, and Nador is quickly asked to join the club, since he was able to bring Superman to their meeting.  All in all, a pretty juvenile story that took up sixteen (16) pages.  The art by Swan is nice, but that’s ll this story really has going for it.  Well, that and the Adams cover, of course.

There is a second nine (9) page story also in this comic, it is entitled; “How Perry White Hired Clark Kent!”.  It was written by Jerry Siegal with both pencils and inks by Al Plastino.  But it is a reprinted story from ten (10) years earlier, appearing in Superman # 133, cover dated November 1959.

That’s all folks for this week’s RETRO REVIEW, but be sure to return next week for a brand new Fabulous Find. Hope to see ya then …