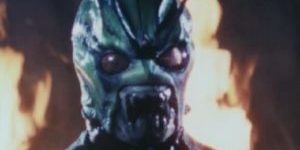 Kamen Rider Shin, who neither wears a mask nor rides a motor cycle.

Young motorcycle racer Shin Kazamatsuri dreams, in the first person, of brutal murders being carried out by a horrifying grasshopper creature. As he’s currently the test subject of genetic experiment conducted by his father, Dr. Kazamatsuri, and his father’s aloof and somewhat reckless partner, Dr. Onizuka, he’s concerned that he’s the one carrying out these murders. He’ll need to battle his way through a criminal syndicate, the CIA, evil cyborgs, and mad scientists to unravel the mystery of what’s going on. 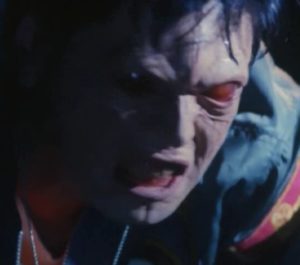 That…looks painful. You OK there, Shin?

Produced by series creator Shotaro Ishinomori, Shin Kamen Rider: Prologue was a direct to video feature film intended to appeal to the now-adult fans of the original series. It boiled the story down to its most basic elements – young man unwilling transformed into a super soldier by a shadowy criminal organization, uses those abilities to destroy the organization – and gave it a grittier, more down-to-earth take with more “realistic” violence (fountains of blood over fountains of fireworks).

It went over like a lead balloon, and remains a red-headed stepchild of the wider franchise to this day.

While certainly a departure from the franchise’s signature style, Shin Kamen Rider: Prologue is a strong reimagining of the Showa Era’s central premise for the 90s. It’s not without flaws, but it is indeed a decent film and it’s a bit more deserving of respect than its reputation would indicate. 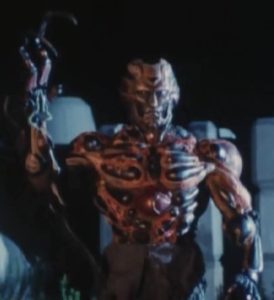 Monster of the week, for once equally as monstrous as the hero.

NEXT WEEK: Strange Times & Places comes in at a strange time (12 hours early) to talk about the Halloween themed Elseworlds tale Superman: War of the Worlds.

IN TWO WEEKS: We’ll stay in Toei’s corner of the Tokusatsu galaxy and watch Space Sheriff Gavan: The Movie.