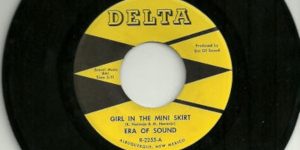 This week I thought we might get musical once again, as it’s been a while since I featured a 45 rpm record.  So today, I present another lost classic, this time it’s: Girl in the Mini Skirt by Era of Sound.

Little is known about the band.  They apparently came from Espanola, New Mexico, of all places and had two brothers in the band.  They are credited as the co-writers of this garage band classic.  Their names were Reynaldo and Michael Naranjo.  The record itself was issued by John Wagner Studios on their Delta Label.  The record was given the number R-2255 and was issued in May of 1967.   The studio was located in Albuquerque, New Mexico.

The flip side, or b side, is a song called Stay With Me.  This song is more of a ballad, but is still a pretty good song.  As far as I can find out, this record was the only release by Era of Sound.  I doubt that the song made much of an impact back in 1967, except locally, but it has been re-issued on garage band compilation albums and CDs a number of times since then and can now be considered a classic in the garage genre.

It case you’d like to see the labels, here is the A-side:

And here is the B-side:

Thanks for stopping by this week and I hope you enjoyed this lost garage band classic song. See ya next week for a new RETRO REVIEW and another Fabulous Find.