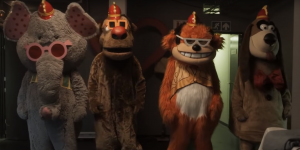 We close out this year’s month of Halloween (known by some as “October”) with what was supposed to be a 1 out of 5…but the movie frikkin’ ruled: 2019’s The Banana Splits Movie!

The Williams family is celebrating the birthday of their youngest son, Harley, with tickets to a taping of his favorite show: The Banana Splits! Behind the scenes, the long running show has been cancelled and today will be the last taping ever…which doesn’t sit well with the already-somewhat-creepy animatronic stars of the show. Their prime directive is “The Show Must Go On”, and the blood-soaked lengths they’ll go to fulfill it will take cast, crew, and audience by surprise…

Why Does This Exist?

The Banana Splits was a Hanna-Barbera show that aired 31 episodes between 1968 & 1970. It featured the eponymous band, made of mascot-style costumes designed by Sid & Marty Kroft, getting into wacky adventures and playing music in between various short (mostly animated) segments – meant to be sort of The Monkees meets Laff-In, but with costumed characters.

Five Nights at Freddy’s is a horror video game franchise that has been massively popular in the last five years. The premise is simple enough: the player is the night watchmen Freddy Fazbear’s Pizza, a family fun restaurant where patrons are entertained by a collection of animatronic cartoon animals…who sinisterly roam the halls of the sprawling family fun center by night.

Warner Bros., the owners of the Hanna-Barbera catalog, tried unsuccessfully (and simultaneously) to get both a Five Nights at Freddy’s movie and a straight Banana Splits reboot off the ground.  Had either worked, this flick would not exist.

This is an incredibly effective horror movie. I was downright shocked by how good it was because, on the face of it, remaking a wacky kids’ show from the 60s as an out-and-out horror flick sounds like the dumbest idea you’ve ever heard. But it works: the contrast between unblinking costumed characters in wholesome sets and slasher violence creates a truly unsettling effect, and the robotic killers never “break character”. This isn’t malicious, this isn’t revenge, it’s what they need to do to keep performing for children…and why all robots should be three laws compliant.